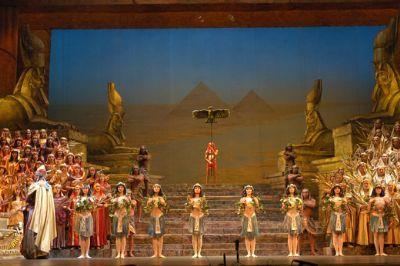 The 31st international music festival of the Algarve (FIMA), which starts this weekend, will include 23 shows performed in 15 different locations across the region with one of the highlights of the programme being a spectacular performance of the Verdi opera Aida.

Maestro and FIMA’s artistic director Osvaldo Ferreira said: “This is the most complete and dense programme that we have had until now.”

The festival will start on April 10 from 9.30pm with an opening performance at the Teatro das Figuras in Faro of Aida, an opera written by Giuseppe Verdi that tells the story of an Ethiopian princess and slave first performed in Cairo in 1871 and still wowing audiences worldwide more than 100 years later.

The Estremadura orchestra will perform a symphony concert conducted by Osvaldo Ferreira at the Lagoa Municipal Auditorium on April 17 from 9.30pm.

A piano and violin recital by musicians Marian Soluba and Patrycja Piekutowska is to be played at Silves Câmara on April 23, in the auditorium of Caldas de Monchique on April 24 and in the Castro Marim municipal library the following day. These will all start at 9.30pm.

The festival will continue throughout May across the region with performances by a number of orchestras including the Algarve Orchestra.

Dance will also be well represented at the FIMA festival with the Portuguese National Ballet company performing at the Lagos cultural centre on April 28 and 29 while flamenco rhythms will ring out during performances by the National Ballet of Spain on May 8 and 9 at the Arade congress centre.

Although this is the most ambitious FIMA festival ever undertaken in the Algarve, the regional tourism board (ERTA) plans to apply for European funding to finance an even larger festival in the future to rival similar in Southern France and Spain.

For more information and a full listing of all the events, please visit the website, available in Portuguese only, at www.fima.pt.