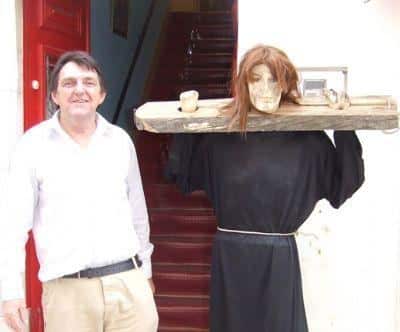 In an exclusive tour of a new museum in the city of Lagos with its creator, long-term British resident Lord James Welsh, the Algarve Resident was shown some of the truly frightening torture instruments from the 16th century and their uses.

A new museum, filled with original and horrifying instruments of torture from the 16th century inquisition, has opened in Lagos.

Liverpool-born property developer Lord James Welsh moved to the Algarve around 20 years ago with his wife, Countess Ingrid Zerfowski. He has now decided to share his passion for history with the city where he lives.

“As my wife is German, we decided to invest in a home country and bought the rundown castle Schochowitz, originally built in the 11th century,” he said. With the purchase came the title Lord.

“While renovating the building, I found a number of original torture instruments in the basement, dating from the 16th century and decided to exhibit them.”

Instead of keeping the macabre items in the castle, Lord James had them shipped to Portugal in November last year to exhibit in a historical town house that he has rented in the centre of Lagos.

Visitors to this museum will see a great number of shockingly cruel instruments that were used to gain confessions from suspects as well as punish criminals and condemn witches.

Included in the exhibition are two original inquisition chairs. Both chairs are slightly different, and indeed many different versions existed but their purpose was the same.

The chairs are covered in metal spikes where the victim would be seated, with straps for the arms and legs, which could be progressively tightened, resulting in the penetration of the spikes into the flesh.

The strength of this instrument lay in the psychological terror that it caused the victim, keeping them alive for a long time as the pain of the torture grew worse.

“The actual metal scales are original and were found in my castle, where witches were once burned. A woman was condemned a witch if she was found to weigh more than a bible or a feather by the scales,” he said.

Visitors will also see an original garrote, water torture instruments, a cage, an electric chair replica as well as male and female chastity belts at the museum, among other items.

One room of the museum is dedicated to the guillotine, with a silent black and white video clip of a real decapitation in France.

Some of the exhibits have clothed mannequins to demonstrate how they were used, while others have detailed information about their history in both English and Portuguese.

“I think the mannequins have a great visual impact, but the entire exhibition, with the video clips and photographs of real torture victims around the world sends a clear message to people of all ages against the violation of human rights that are still happening to this day,” he said.

As well as opening this museum, he is also working with Lagos Câmara President, Júlio Barroso, to open another two in the city.

“One of the future museums will be dedicated to the history of Lagos’ old manor houses, while the second will show people the history of Portugal from Henry the Navigator to Amália Rodrigues,” he said. “I want to bring culture of all forms to the Algarve and make Lagos a cultural centre for people to visit.”

When not in Portugal, the family often visits their castle, which they say is haunted by several ghosts.

“I once woke up in the night to find two people in my bedroom dressed in 15th century clothing talking to each other,” he said. “And another time, a friend came to visit and I heard her running down the corridor and shouting my name in the night, after ‘someone’ had crept into bed with her.”