Portugal Resident
Home Original Museum visitor figures are on the up 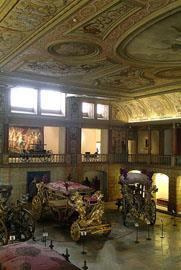 MORE PEOPLE than ever before are visiting Lisbon’s museums, according to the Instituto Português de Museus (IPM).

However, one quarter of all visitors tended to take advantage of other activities being hosted by or staged at the museums rather than simply to acquaint themselves with the collections on show.

In order to drum up receipts and counter dwindling visitor numbers, museums are increasingly renting out space to companies and cultural entities for cultural events, small seminars, talks and even gastronomic fairs.

In its visitor surveys, the IPM classified visitors into 21 distinct types, including tourists, young people, school children, the elderly, professors and teachers, family tickets, Sunday and public holiday visitors and friends of the museum.

Two of the 21 groupings (representing the 22 per cent) were categorised as those visiting the museums to see temporary exhibitions, classical or jazz music concerts, shows and plays, workshops, special commemorations, or visits to museum gardens, restaurants and cafés.

In some cases as many as 50 per cent of all visitors were going to a museum because of a separate activity or attraction that had nothing to do with the museum’s permanent collections.

The five museums in Lisbon most visited were surprisingly not among those that had the largest number of occasional visitors going for a specific event.

Lisbon’s Coach Museum for example, the most visited of them all (221,000 visitors in 2006) only attracted nine per cent of visitors to other events not specifically linked with the museum.

The National Archaeological Museum was the second most frequented in 2006 (192,000), although it attracted 28 per cent of visitors going to attend other events.