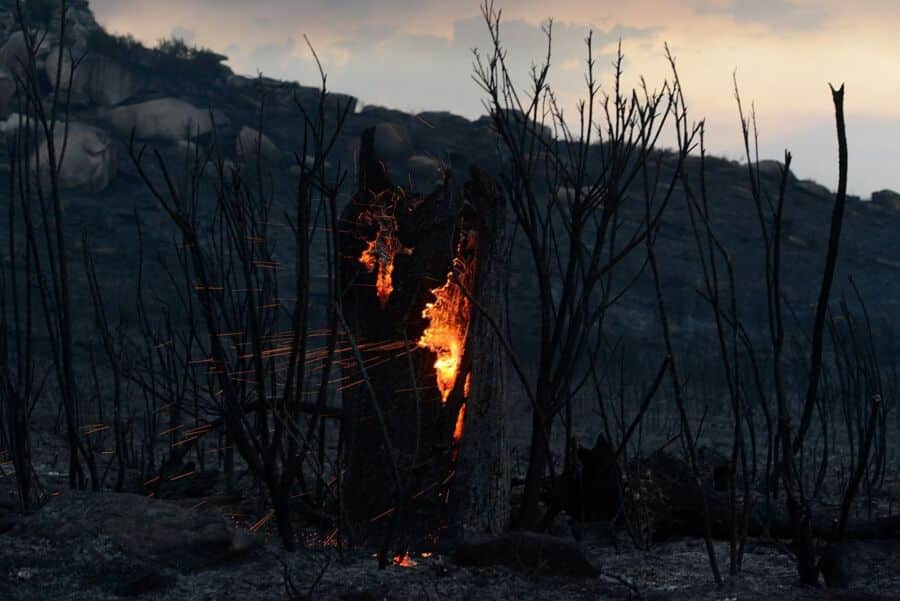 A couple in their 80s became the first civilian victims of this summer’s raging wildfires, yesterday afternoon in the borough of Murça. Everything points to them having decided to ‘make a dash’ out of the ‘one-way-in, one-way-out’ village of Penabeice, and coming off the road in increasingly frightening conditions.

Smoke will have been thick when the couple’s car careered off a straight bit of road and plummeted into a ravine.

The car appears to have burst into flames, leaving both carbonised, and burning the area around it.

President Marcelo has said: “Regardless of the context in which it occurred, and the causes that prompted it, I cannot fail to profoundly lament the road accident which led to two deaths in the borough of Murça, and present my condolences to the families of the victims”.

As news anchor Clara de Sousa pointed out on SIC’s 8pm evening show, had the couple not fled their home, they would almost certainly have been alive today.

She referred to the hideous road deaths of over 60 people in Pedrógão Grande in 2017. They too would not have perished had they remained in their homes, she said.

The wider context in the borough of Murça last night was grim. The fire that began on Sunday has bowled across borough boundaries, reaching the municipalities of Vila Pouca de Aguiar and Valpaços. Around 300 people have been evacuated from various villages (Valongo de Milhais, Ribeirinha, Penabeice, Mascanho, Paredes and Vale de Égua).

Late last night, the situation was still hugely complicated, albeit the official version was that it was “controlled”.

A number of active fronts were still in evidence. This morning it is the fire causing authorities most concerns.

SIC television news has pointed to “more than 3,000 hectares burnt”.

Murça mayor Mário Artur Lopes has described the situation as “unpredictable and difficult to face”.

“More than half the borough continues to suffer from this dramatic situation”, he said last night. “There is an insufficiency of means, more specifically, air means for combat…”

Hopes last night were that a ‘window of opportunity’ – in the form of reduced temperatures and increased humidity – would give firefighters the advantage they need to get on top of this particular fire.

Today, as temperatures are shortly set to start rising again, the government will decide whether the country remains in a ‘situation of alert’ from midnight, or whether it returns to the slightly more stringent ‘situation of contingency’ from Wednesday.

These decisions come in the context that some businesses are threatening legal challenges to these restrictions, saying it is impossible for them to work.