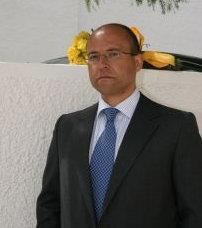 ROBERT MURAT’S lawyer Dr Francisco Pagarete told The Resident’s Eloise Walton that he is not worried about his client’s position.

When asked about his client’s position regarding a report in the Portuguese newspaper Expresso that the PJ may soon release Gerry and Kate McCann from their status as official suspects (arguidos), he said: “I am not at all worried about my client’s position.”

He went on to say that “it is blatantly clear that Robert Murat had absolutely nothing to do with Madeleine’s disappearance on the night of May 3, 2007.”

Speaking on Saturday (May 3) outside the apartment where Madeleine was last seen 365 days ago, he said “he believes that the Polícia Judiciaria suspect that Murat is innocent of any wrong doing”.

When asked about the past year from his client’s perspective, Dr Pagarete said: “The first four months were the most difficult for Robert, especially with the huge media attention on him and the disappearance of the then three year old toddler.”