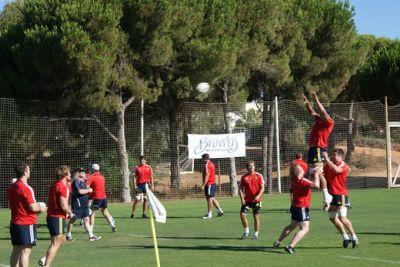 Munster coach Tony McGahan believes a week in the Portuguese sun has put his team “ahead of the game” in the build up to the new season.

The Munster squad arrived back home on Wednesday after a seven-day training camp at the Browns Sports and Leisure Club in Vilamoura ready for tonight’s (Friday’s) first pre-season friendly against Sale Sharks at Musgrave Park.

McGahan earmarked the week at Browns to reunite his squad and believes the exercise has given his pre-season programme a huge boost.

“For the first five weeks of our pre-season campaign, we put a lot of emphasis on strength and conditioning work, but this camp has allowed us to focus on the rugby once again,” said McGahan.

“We’ve been having three sessions a day and it has been nice to have the sun on our backs day in, day out.

“I’m very happy with the work we’ve been able to do out here and I think we are certainly ahead of the game now compared to last season.”

McGahan was able to take 54 players, including his Lions stars, with him, along with a full compliment of back room staff.

“The Lions players were magnificent and they totally immersed themselves back into Munster rugby. They got on the weights, went to team meetings and became heavily involved as senior players,” he said.