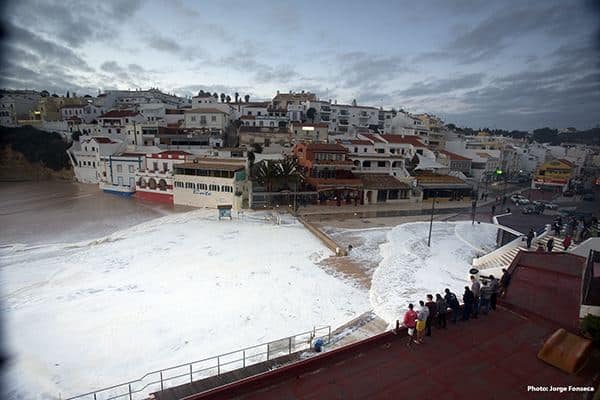 Portugal’s largest environmental association has warned that people should be “immediately” moved from homes and businesses sited close to the sea.
Speaking to Correio da Manhã newspaper after a national initiative to highlight the effects of climate change last week, Quercus said: “Political courage is needed, but it could mean less social costs rather than waiting for the problems before reacting.”
Quercus was talking after a three-day storm in January managed to cause almost €6 million worth of damage to homes and businesses across the country’s coast.
“Moving populations from the coastline is one possibility that has to be studied, especially in the north of the country,” Quercus’ Carla Graça elaborated.
It is not the wave swells that are the problem, she pointed out, it is the relentless rise in sea levels – expected to encroach by around a metre by 2100.
Once bad weather comes into play, this increase could be devastating, she said.
Already this year, storms have stripped sand from popular beaches throughout the west coast. Along the Costa da Caparica, the government has pledged to bring in new sand before the season gets underway. This alone will cost millions.
Reporting on the final bill, Correio da Manhã estimates €28 million “just to repair the damage of this winter”, with €17 million coming from EC funds.
Meantime, geophysicist Filipe Duarte Santos will be heading up a government think-tank to try and thrash out some kind of coastal-protection strategy.
“It will take around a year,” he said, and it will be “essential to listen to those who live along the coast”, while it is also the “responsibility of scientists to inform populations on what is going to happen”.
Photo: January’s freak waves in Praia do Carvoeiro