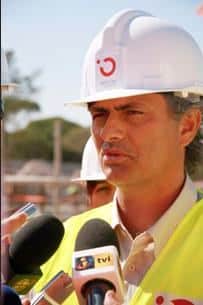 FORMER CHELSEA manager José Mourinho described his investment in the Palácio da Quinta Resort and Spa development in the Algarve as a very low risk margin, “contrary to football”.

Speaking after a private visit to the development site on Friday, he said: “My job is risky, but not my investments. I am very aggressive at achieving my goals, but with this kind of project I take great care. I take enough risks with football.”

José Mourinho would not reveal the amount that he will be investing in Portugal’s first six star hotel, only saying: “It’s not the right time in the championship to say, yet.”

During a press conference at the Hilton hotel in Vilamoura, he said: “This project is absolutely fantastic. Portugal should

be happy and I congratulate myself for being a part of this. I think victory is certain.”

He also said that he is investing in the Algarve for personal reasons and because “life is not just football, it’s much more than that.”

The new Palácio da Quinta Resort and Spa, which has been classified as a Projecto de Interesse Nacional (PIN), a project of national interest, is set in nearly 61,000 square metres of land in Quinta do Lago and will cost 88 million euros to build.

The development will comprise 135 rooms, 22 suites, one presidential suite and a further 80 one and two bedroom apartments.

It will provide guests with sauna, spa and jacuzzi facilities.