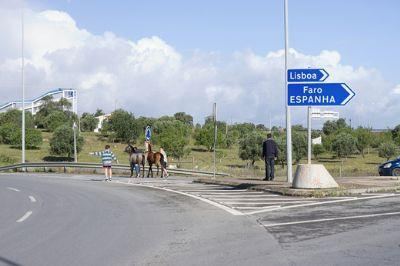 Horses kept in a field next to the Alcantarilha roundabout escaped after fencing was broken, allowing five horses to wander onto the busy roundabout at 10am on Thursday, April 16.

Two of the horses were making their way onto the Silves road while the other three horses were heading towards the A22. Eyewitness Celio Agostinho told the Algarve Resident: “The horses were really panicked and it was only thanks to the intervention of German and Dutch motorists that they were prevented from accessing the A22.  You can only imagine what could have happened if the horses had made it onto the motorway.”

He continued: “The farmer who owns the horses told me that attempts to steal the horses had been made before and he suspected that thieves had broken the fencing.”

Motorway maintenance workers were called to the scene but the farmer, with the help of the motorists, was able to safely tether all the horses back into the field without any accident occurring.