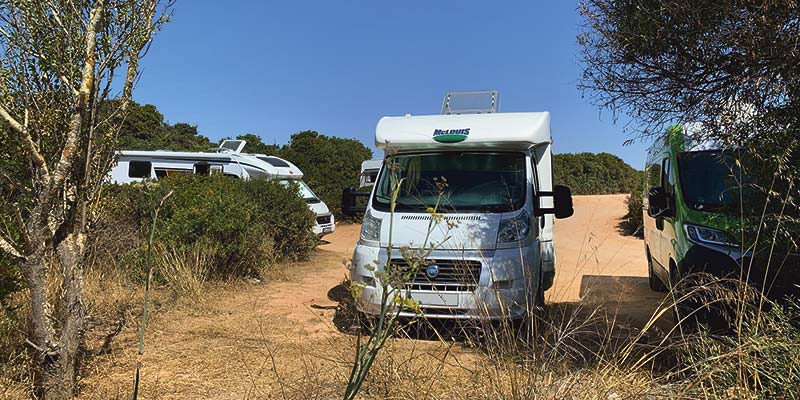 Portugal’s motorhomers – people who purchased motorhomes with the idea of exploring the open road in their leisure time – are planning a mass demo in Lisbon later this month following the ban on parking or overnight stays in anything but ‘authorised locations’.

The issue is all about freedom. Who wants to be herded into a ‘caravan park’ when the whole idea of having a motorhome is ‘freewheeling discovery’?

Motorhomers’ personal freedoms came crashing down in January – admittedly when the whole country was also confined to their homes as a result of the pandemic.

But now that the summer is upon us, the limitations of articles 48 and 50 of the Highway Code – and the swingeing fines that can be levied if people do not follow them – are proving just too much.

A petition signed by almost 8,000 motorhomers and enthusiasts has entered parliament, and political parties (PCP communists, Bloco de Esquerda, the Greens and centre-right PSD) have all responded with their own proposals to ease the unpopular status quo.

Promoting the mass gathering from midday in Parque das Nações in Lisbon on June 26, organiser Elizabete Desidério asks for as many participants as possible, so that the message can be transmitted loud and clear.

The idea is for a ‘slow drive’ all the way to parliament. As the vehicles are legally-prohibited from stopping, the plan will involve driving slowly round parliament at least twice.

But it’s not that easy. There are now so many laws governing these four-wheeled home-from-homes that only vehicles licensed since the year 2000 can take part in the protest – and even these cannot be in the middle of Lisbon after 9pm.

For Elizabete Desidério, the curtailing of motorhomers’ freedoms is like “cutting the wings of a bird”. The new law “totally extinguishes itinerant tourism”, she says.

“It is an attack on citizens’ rights and liberties. We are really talking about an unconstitutional article” – particularly as ‘dozens of ASA’s’ envisaged by Turismo de Portugal have still not been established, meaning motorhomers really do not have sufficient choice in many areas.

In Ms Desidério’s opinion “prohibiting the parking of motorhomes during the day at beaches is akin to removing citizens’ right to a space in a sectarian manner, as anyone driving a regular vehicle is entitled to park at the beach as long as they like.

Lusa explains the new law actually makes it ‘illegal’ for motorhomers even to stop for a rest (unless in an authorised ASA). Taken to its logical conclusion, this means they cannot pause for a cup of coffee, or meal, at a service station.

The Greens and BE stress that there are “extensions of hundreds of kms” throughout Portugal where there is not one parking site that allows motorhomes to stay over”.

The government’s objective in introducing restrictions was to “stop wild camping” and ‘align Portugal with best European practices’.

One of the areas ‘worst affected’ by wild camping has been the west’s Costa Vicentina (running from the Algarve into the Alentejo) – and despite the law, it still remains periodically ‘blighted’ by campers, particularly during the high season.