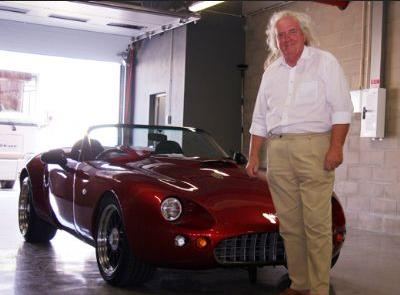 A traditional British sports car, designed by one of the UK’s most renowned engine designers and engineering consultants, Al Melling, is soon to go into production at the Algarve Motor Park.

“I said to Paulo Pinheiro eight years ago ‘You build me a track and I will bring you a car’ and that is exactly what happened. I have brought my Melling Wildcat to be built in the Algarve,” said Al Melling.

According to Al Melling, the manufacturing industry in the UK is in trouble for several reasons, so when he decided to build his own car, he realised he had to move away from the UK and his Rochdale factory.

“All of the parts on the Wildcat are ours, except for the lights and the tyres. The engine is bullet proof and the whole body is removable which means that our mechanics never need to go underneath the car, it can even be built from scratch in just two days,” he said.

“The beauty of this car is that buyers can choose the engine they want and all sorts of other features, although it comes as standard with a 4.5 litre Melling V8 engine.”

Despite the current economic downturn, Al Melling said that he is confident his car will succeed and is also opening a production plant for it across the Atlantic in Las Vegas.

Aside from his sports cars, Al Melling is also working on vehicles for the future.

“I am developing a concept for the electric vehicle because that is what the world now wants,” he said. “It is not possible to produce an electric car with the new technology available, so I have created a concept that allows current technology to work.”

According to Al Melling, 90 per cent of vehicles never travel more than 50 kilometres radius of the house or a certain point.

This means that a vehicle could run on an ordinary high quality battery, which can be removed quickly and replaced with a full one at a station, with the used one being recharged at the mains.

For more information, please visit the website, available in English, at www.almellingsportscars.com.

Meanwhile, the Algarve Motor Park is also preparing to host the third round of the season for the Le Mans Series between July 31 and August 2.

For more information please visit the website, available in English and Portuguese at www.autodromodoalgarve.com