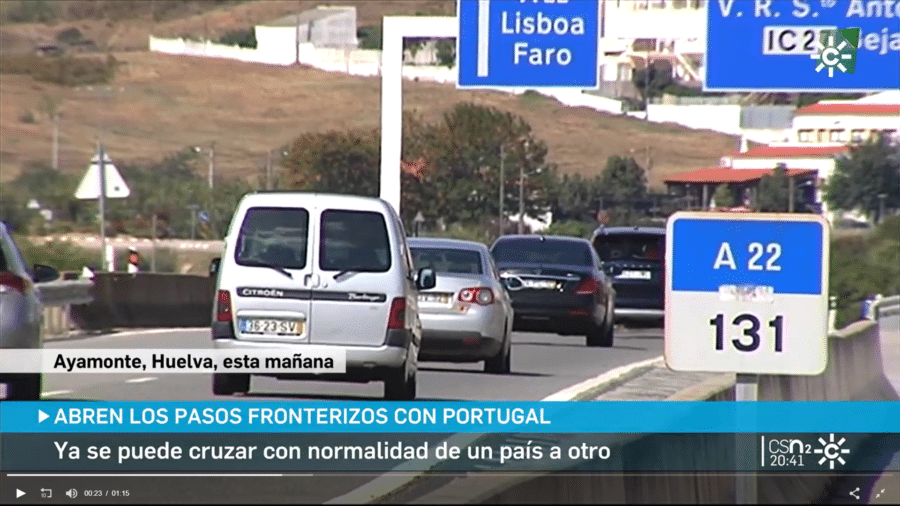 Thousands of Spaniards took advantage of the reopening of land borders to Portugal this weekend to file into the Algarve.

Indeed numbers this morning were far higher than those driving into national territory yesterday.

This comes just as MAI (the Ministry of Internal Administration) has sent out a press release to media offices including Spain on a list of 19 countries whose residents are not meant to be travelling to Portugal for anything but essential purposes (click here).

The term ‘essential purposes’ does not encompass weekend getaways.

Said a source from the border at Castro Marim today, “traffic movement during the morning averaged around 120 cars per minute, a number superior to that registered on Saturday, and very much higher than the initial few days following the first deconfinement”.

The same source said: “With the reopening of frontiers, control is not being done. But there are many Spanish and Portuguese citizens calling in to ask if there are any restrictions on passage”.

But for the economically-struggling town of Vila Real de Santo António (VRSA), the Spanish influx was a ‘godsend’.

Hundreds arrived in time for lunch, and shopping (according to Lusa) – though again this information doesn’t ‘gel’ with the reality that VRSA is actually on the list of municipalities that have been put ‘on alert’ due to their incidence of contagion (click here).

According to the prime minister if its case numbers of SARS-CoV-2 do not improve by next Thursday, the town’s businesses could face being ‘pushed backwards’ in terms of freedom to operate.

None of this was referred to in reports this afternoon which simply cited the delighted of Spaniards extolling the relief of being able to leave their country.

“We needed to get out and enjoy the fresh air. We have been in captivity for a very long time”, Cristina Tejedor told Lusa as she enjoyed a meal with her family in VRSA.

She told reporters that she had been waiting “a long time for frontiers between Portugal and Spain to open” because she feels safer in Portugal than she does in Spain, said Lusa.

“The Portuguese are more disciplined”, said Ms Tejedor. “They comply with the rules and use masks, which doesn’t happen in the majority of Spanish towns”.

Lusa’s reports continues: “Cristina Tejedor added that many Spaniard have a habit of coming to Portugal for weekends to enjoy Portuguese gastronomy and to buy fabrics that they cannot buy in Spain”.

It went on to hear from local businesses how welcome the many thousands of day trippers were.

Manuela Romeira, described as selling ‘regional Algarvian dried products’ said: “We need the Spanish. They are our best customers, and since yesterday we’ve seen a great number of them in shops and restaurants”.

Restaurateur André Costa at least referred to the fact that “the future is still very uncertain, but the reopening of the frontiers has given us hope and motivation to work in the hope that the situation returns as much as possible to normality”.

Mr Costa told Lusa that he truly believes the “summer can save this year’s tourism”.

Lígia Oliveira, selling fabrics, described this weekend as one of “happiness to see the town fill up with a great movement of Spanish, our principal clients throughout the year. Between Saturday and today what we have taken in terms of business has given us some encouragement to keep going…”

This was where Lusa report explained that “according to police at the frontier, traffic movement on May 1 almost tripled in relation to the same day last year, a period when circulation between the two countries was limited”.

Indeed frontier authorities “said traffic movement was below expectations because many Portuguese and Spanish citizens still don’t understand how circulation has reopened” (meaning, they believe certain restrictions are still in place, as indeed the MAI statement suggested they are meant to be).

Said a police source: “There could exist some confusion which we believe could be related to the first deconfinement (last year) when the country reopened but the frontiers remained closed with certain exceptions. At this time, there were many people who were obliged to turn around and go back”.

However it wasn’t all plain sailing (over the border) this weekend. The same police source explained that more than 70 people and goods trucks “full of produce” were stopped because the lorry drivers were accompanied by their wives, “a situation that is not covered in the exceptions for circulation in the government decree”.

This report has stuck strictly to information coming out today in the local media. The fact that it makes no sense at all (in terms of government policy as per information sent out to the press yesterday) is not our responsibility.