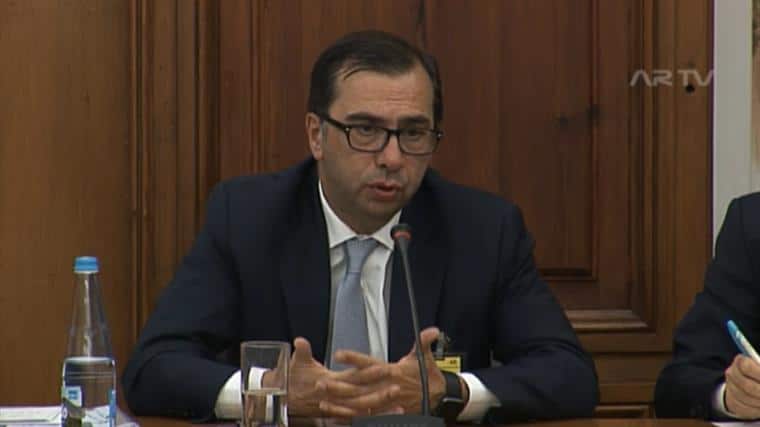 There is more scandal this weekend as Benfica president (currently suspended from his duties) Luís Filipe Vieira returned home after three nights in police cells culminating in a 4-hour stint answering judicial questions (see below).

The latest furore centres on Vítor Fernandes, a former director of Novo Banco – with whom public prosecutors believe Mr Vieira had a “privileged relationship”.

In the bluntest of terms, this means Mr Fernandes is believed to have been complicit in an alleged Ariadne’s thread of financial intrigue that benefited Mr Vieira at the expense of the State.

Numbers being bandied about when authorities swooped on Mr Vieira and three others last Wednesday suggested the State had lost ‘around a €100 million’.

Vítor Fernandes is not an ‘arguido’ (official suspect) in the investigation, dubbed Operation Red Card.

At this point he has simply been mentioned in the judicial dispatch outlined by Criminal Court judge Carlos Alexandre as having given Mr Vieira “support”.

But the mere fact that he has may have helped what is being presented as an outrageous ‘sting’ (Mr Vieira is understood to have managed to buy his own €50 million debt for just €9 million), puts his likely new role at the head of the country’s Banco do Fomento (Development Bank) – devised to manage the billions in pandemic ‘relief’ coming from Brussels – into serious question.

The Bank of Portugal in a statement has said that all the latest information will be “duly pondered”.

But Opposition MP Catarina Martins of Bloco de Esquerda has wasted no time in piling in with accusations.

It is “unacceptable” that Vítor Fernandes was even considered to run the Development Bank – not simply because of his connection with Operation Red Card, but because his name has been associated with “successive banking scandals that we have endured during recent years”, she said today in Vila do Conde, at a presentation of her party’s candidates in the upcoming municipal elections, stressing that “when Vítor Fernandes’ was chosen by the government, all this curriculum was already known…”

Former presidential candidate and vehement anti-corruption ‘voice’ Ana Gomes told a SIC news programme on Saturday that it would be important to know who put Mr Fernandes’ name forwards to run the Development Bank in the first place.

This is the State bank after all that is supposed to run European funds – not just the ‘bazooka’ , she said.

Banking regulators are understood to have vetted Mr Fernandes’ credentials. He “passed without problems”, says Observador.

Media focus now is on how rigid this vetting process must have been.

Observador is one of a number of sources suggesting regulators may not have had all the information they needed.

In the eye of the Public Ministry are credits totalling €408.9 million that were restructured following a proposal by Vítor Fernandes and approval by the executive commission of Novo Banco led by António Ramalho, says the online.

For now, Mr Fernandes’ immediate future looks compromised. The final hurdle to his taking up the appointment as head of the Development Bank lies with CReSAP – the State agency tasked with “assuring transparency, impartiality, rigor and independence in the recruitment and selection of candidates for senior management positions in Public Administration”.

A source for CReSAP has said the agency has 10 days to reach a decision.

MEANTIME, Mr Vieira and the other three ‘suspects’ named in Operation Red Card have all been allowed to return to their homes on various different bail conditions.

Mr Vieira is under house arrest until he can come up with a €3 million bail surety (he has 20 days grace to do so); his long-term business associate ‘the Chicken King’ José António dos Santos is in a similar boat – dependent on a €2 million bail surety; Mr Vieira’s son has to post €600,000 and sports agent Bruno Macedo €300,000.

All four men have had to surrender their passports.

Contacts have been limited by the court, with Mr Vieira particularly forbidden from being in touch with any members of the administrative council of Benfica or of Novo Banco.