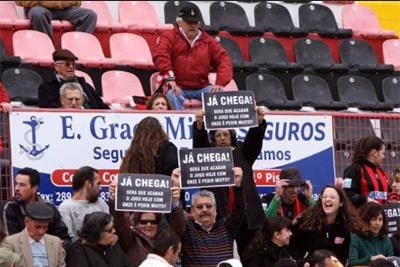 The poor quality and inconsistency of referees, that had been highlighted by Olhanense’s exposure on national TV in their games against Gil Vicente and Estoril, resulted in a meeting between club president José Isidoro da Silva Sousa and officials of the Portuguese FA last week.

Further controversy was to follow in the home game against Sp. Covilhã on Sunday.

As early as the 10th minute Olhanense defender Stephane was shown a yellow card for an innocuous handball yet an identical incident later in the game resulted in a free-kick but no card for an opposition player.

It was the visitors, content to keep ten men behind the ball, who took the lead with their first attack halfway through the first period when Vaz headed home a corner.

The home side responded immediately when Marco Couto, captain in the absence of the injured Rui Duarte, scored from six metres.

The second half saw the introduction of top scorer Djalmir, returning from injury, and the lively Castro. This combination almost gave Olhanense the lead when Djalmir just failed to connect with Castro’s cross.

From a quickly taken free-kick the home side had the ball in the net only for referee Rui Costa to order it to be retaken. With ten minutes to go Covilhã brought on the diminutive Roma, who in added time was deemed to have been tripped in the area by Javier.

The tackle appeared to be legal and the home crowd, who had seen four of their players sent-off in the previous three games, were waving placards that stated: ‘Please let us have 11 players on the pitch at the end’ but it was not to be.

Javier was shown a second yellow card and given his marching orders. Roma stepped up to score from the spot and to consign Olhanense to their third defeat in a row.

João Gonçalves and Ukra were in the squad that played Switzerland at Fátima last Tuesday.