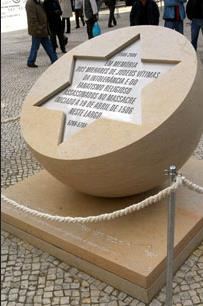 Lisbon Mayor António Costa has unveiled Lisbon’s Memorial to Intolerance, which commemorated the victims of the city’s Jewish Massacre in 1506.

The ceremony, held last week, was attended by Lisbon Patriarch Dom José Policarpo and the Chief Rabbi of the Jewish Community in Lisbon, Eliezer Shai di Martino, and representatives of different ethnic and religious communities in the city.

The light grey stone memorial in Largo São Domingos marks the spot where on April 19, 1506 a massacre began in the old Jewish Quarter of the city which left 4,000 Jews dead by the end of the day.

The monument is made up of two sculptures by architects Graça Bachmann and Segismundo Pinto and sculptor Carlos Ramos, paid for by the Jewish community and the Catholic Church.

It is supposed to symbolise reconciliation and respect and is inscribed with the words ‘Tribute from the City of Lisbon to the victims of the Jewish Massacre of April 1506’ and also includes a mural with the phrase Lisbon – City of Tolerance, by designers Susana Jesus and Paulo Cardoso, written in 34 different languages.

In their joint speeches, the representatives of both the Jewish and Catholic communities were unanimous in their statements that the monument represented “remembrance and reconciliation” and showed the desire that the “City of Lisbon be a tolerant one, one which marked the respect and understanding of the two communities living and working peacefully side-by-side.”

Dom José Policarpo recognised that what had taken place in this spot had been “one of the most traumatic, dramatic and shocking episodes in Lisbon’s history” and added that “these two religious communities have no reason not to live in harmony”.

António Costa said that the place and memorial should constitute “a symbol of tolerance, acceptance and fraternity amongst all citizens whatever their religious convictions”.