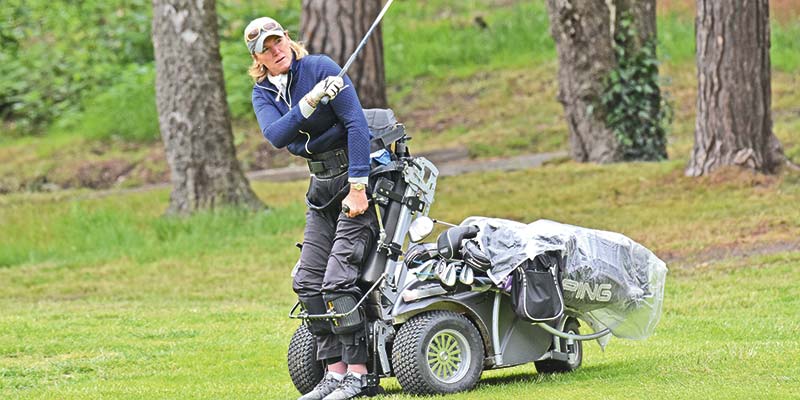 The Resident will be publishing a series of excerpts from chapters of ‘Mulligan – tough love and second chances’. The book contains 18 personal accounts of players with a disability, competing in the game of golf.

Their inspiring stories are sure to be of interest to many readers and the book comes with a unique ‘Give and Gift’ feature which also plays a supportive role in hospitals and health centres. Here is the third in the series.

Monique Kalkman is one of 18 golfers with a variety of disabilities who played in a unique golf event recently at Camberley Heath GC in England, to raise greater awareness for inclusive golf. The day, supported by RSM (a leading audit, tax and consulting firm) and EDGA (a not-for-profit organisation which helps people with disabilities to enjoy golf), was a success and Monique proved an excellent ambassador for her sport and the considerable health and social benefits that golf offers all players.

Monique has an athlete’s understanding of perseverance, which first meant honing early tennis skills by pounding a tennis ball against the bricks of her garden wall. She was a very good player, judged by many in her Dutch community as “the next Chris Evert”, and Monique loved watching Chrissie on TV.

Then in 1979, aged 14, when hopes and dreams were blazing, mysterious exhaustion led to the discovery of a cancerous tumour on her spine: she would be confined to a wheelchair.

Somehow Monique came through this with the help of her large, positive family (including four sisters and two brothers). Even at 14 Monique refused to be defined by her disability by well-meaning ‘white coats’ in a gloomy rehab centre.

Within a year, Monique was watching the Paralympics and, four years later, would go on to win the gold medal in table tennis aged 19, in 1984, before winning gold medals in tennis at successive Paralympics; and earning the crown of World No.1 for six years, frequently watched in matches court-side by the family Boxer dog, Murphy.

Ten years after retiring from tennis in 1997, Monique was drawn to golf, “amazed by the beauty of the nature” on a golf course. She uses what is called a ‘paragolfer’, which allows her to play from a standing position. The paragolfer suits a one-handed swing for mobility and rhythm, and today she hits a golf ball in EDGA golf tournaments with her right arm, with the same conviction as she used to belt that tennis ball against the garden wall.

One day in 2017, Monique’s telephone rang. It was one of the legends of tennis, Stan Smith (former Wimbledon Champion). She was invited to be an inductee to the International Tennis Hall of Fame. In that year’s Australian Open, Monique found herself on the same court with the likes of McEnroe, Becker, Laver, Navratilova, and she got to meet and chat at length to Chris Evert herself.

* Please visit www.edgagolf.com/book for details of the Give and Gift campaign, and the opportunity to donate and receive a complimentary copy of ‘MULLIGAN – tough love and second chances’ as a token of EDGA’s appreciation.