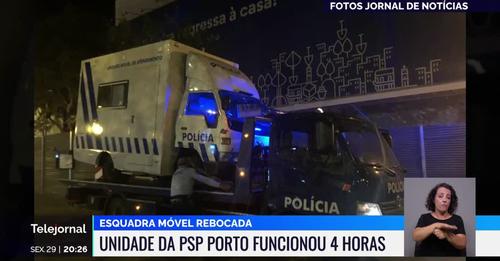 Within hours of “entering into function” Porto’s first mobile police unit – one of the new measures brought in to help crack-down on rising nighttime crime – had ‘broken down’.

The vehicle was hit by a ‘power blackout’ which meant the computers on board needed for the registering of any complaints didn’t work; nor did the vehicle, which online PortoCanal stresses is over 24 years old.

By way of substitution a police van stationed at Porto’s Unidade Especial de Polícia (Special Police Unit) was brought in – “but that also broke down”, said a police source, who assured Correio da Manhã that a third substitute vehicle was supplied, ensuring that police plans for the night “had been accomplished”.

The mobile unit is now being repaired, and will return to the fray from midnight to 6am every night, in various areas particularly Praça da Batalha, Praça de Gomes Teixeira, Estação de Trindade/ Rua de Estação, Campanhã and Rua do Molhe in Foz.

The idea is that the unit will be on hand for citizens to report crimes, register complaints and request information.

By all accounts, due to the comings and goings of mechanics and tow trucks on the first night of this new police presence in Porto’s streets, citizens did not actually file any criminal complaints.