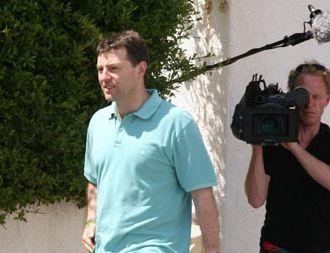 Gerry McCann and two of the original Tapas 9 group made a surprise visit to Praia da Luz on Saturday, April 4 to assist in a filmed reconstruction of the events surrounding Madeleine McCann’s disappearance in May 2007.

McCann spokesman Clarence Mitchell said: “Gerry McCann and Jane Tanner are in Praia da Luz to help in the making of a reconstructive film.”

He added: “Matthew Oldfield, another friend, who was here when Madeleine disappeared, is also on his way to the Algarve to help.”

Kate McCann however, has not returned to Portugal since the disappearance of her daughter.

“Kate doesn’t feel ready to come back yet. It is extremely traumatic for her,” he said. “She knows that Gerry, Jane and Matthew are here to help with the reconstruction and she knows that this good work is being done on behalf of Madeleine.”

Clarence Mitchell said that the filmed reconstruction will show new details to the public, including re-enacted witness statements which could bring in a vital piece of information. “We still need information, that is why we are here today. We still need that breakthrough.”

Clarence Mitchell also said that, in his opinion, the reconstruction should have taken place two years ago, when Madeleine disappeared but several reasons made that impossible.

“When the Polícia Judiciária proposed last year for a reconstruction to be carried out, it was only as a police exercise, and was not for the public to see. When asked if they would participate, the McCann’s friends considered it long and hard, but refused because they felt it would be of no use,” said Clarence.

He added that, at the time, Kate and Gerry were also arguidos and were advised by their legal team not to return. “In 2007, the BBC also requested to film a reconstruction for the Crimewatch programme; however, the Polícia Judiciária declined to take part.”

This reconstruction, which is being made by Mentor Media, includes 15 British actors, as well as a girl of similar age and build to Madeleine, who will be playing her.

“The girl playing Madeleine is the daughter of a family friend, who lives locally, but her face will not be shown in the reconstruction to keep her privacy,” said Clarence Mitchell.

Steve Anderson, Executive Producer for Mentor Media, said: “There will not be any speaking parts from the actors in the film, it will all be narrated. Gerry McCann and his two friends will also not be in the film, they are simply here to guide us through the events.”

He added that the film will include a reconstruction of the night Madeleine disappeared, with scenes filmed inside the Ocean Club and local restaurants where the friends and family dined, as well as re-enactments of key witness statements in the area.

A documentary, which will include the filmed reconstruction, will be aired on Channel 4 in the UK on May 7, near the anniversary of the disappearance of Madeleine McCann.

During the filming on Saturday, a small number of angry Praia da Luz residents and ex-Ocean Club employees, who wished not to be identified, shouted abusive comments at Gerry McCann and the filming crew.

According to Portuguese newspaper, Correio da Manhã, Greentrust, the company that manages the Ocean Club, sent a letter of dismissal to 21 staff stating: “Following the serious results of 2007, whose origins lie in the McCann case, the company prepared itself for a difficult 2008, but the fall in business and the predictions for 2009 make the company unviable.”

Also during the day, a Portuguese woman drove by in a white car and called out in Portuguese: “Go away you murderers!”

In reaction to this and recent media reports about the destruction of posters and lack of support for the latest ‘Find Madeleine Campaign’, Clarence Mitchell said: “This kind of behaviour is obviously wrong and inherently distressing for the family.”

He added: “It is carried out by a misguided minority. Where is the humanity in daubing the posters with paint?”

To the residents of Praia da Luz, Clarence Mitchell said that “Kate and Gerry value the continued support and kindness of those who still write to them and pray for Madeleine.

“For the people who are upset about this, on their behalf, I am sorry,” he said. “To minimise the disruption to local residents, the filming will be done as quickly as possible.”

On Sunday morning, Gerry McCann visited the church in Praia da Luz and celebrated mass with local parishioners before returning to the UK later that day.