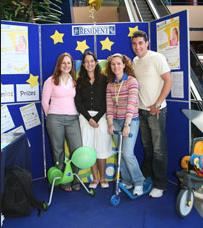 MORE THAN 100 children took part in The Resident’s first ever Mini Stars photographic competition at the Continente shopping centre in Portimão on Sunday.

Children from five months to 12 years old all put on their best clothes and biggest smiles for photographer Ruben Gravanita, all hoping to win some of the fantastic prizes on offer, including tickets for Zoomarine and Imaginarium vouchers.

were photographed in the first hour of the competition alone, as youngsters came with their parents for a free photo shoot at the shopping centre in Portimão.

Many parents had brought their children specifically to enter the competition, while others were eager to enter when they saw the prizes that were on offer for the

Imaginarium had kindly provided props for the children to use in their photos, including a tricycle and a scooter.  All the children were keen to experiment with the toys, especially the scooter that everyone wanted a play with, including the

The day was deemed a success by the organisers, photographer and competitors alike.  All the children that took part in the Mini Stars competition will be featured in a special supplement in the June 6 edition of The Resident.

The winners of all four categories will be announced on June

For further information about the competition, please call The Resident office on 282 342 936.

If your child was entered into the competition and you would like information about purchasing photographs, please contact Foto Gravanita on 282 352 618 or email fotogravanita@hotmail.com