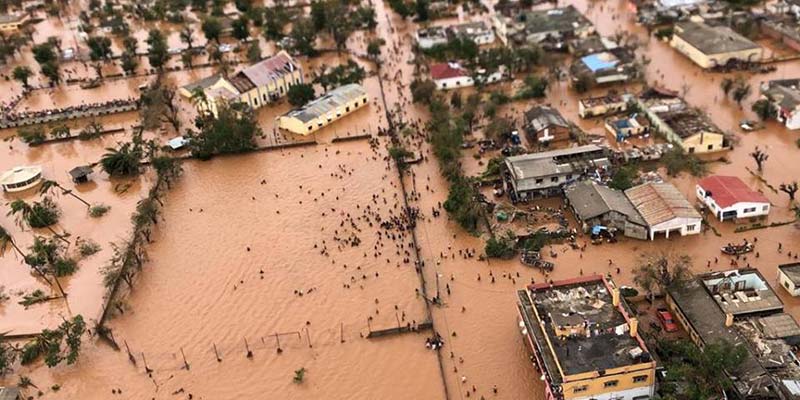 A team of Portuguese embassy personnel is already on the ground in Mozambique establishing the needs of Portuguese residents following the mass devastation caused by tropical cyclone Idai.

Easily the worst cyclone in living memory, Idai has killed hundreds in the former Portuguese colony and neighbouring countries of Malawi and Zimbabwe.

Aid groups from all over the world are struggling to reach survivors trapped in remote areas where some villages are still submerged.

The situation today has been described as one of “life and death” in that thousands of people are still stranded in ‘islands’ within floodwaters, and fresh water, food, medicines and shelter are in short supply.

Secretary of State for the Communities José Luís Carneiro has confirmed that at least 30 Portuguese nationals have been reported as ‘missing’.

Meantime 35 Portuguese military are on their way as part of a search and rescue effort, equipped with GNR sniffer dogs, boats and drones.

Difficulties however are immense. Rains have been pelting down since the cyclone hit last Thursday to the point that rivers are close to bursting their banks and causing further flooding.

In Zimbabwe, dams too are at the point of rupture. Sluices are being opened to ease pressure, but with so much water already saturating wide areas of land, this will only create further hazards.

Mozambique’s port city of Beira bore the brunt of the storm which brought winds of up to 177 km/ hour.

Images of the devastation have been beamed across the world, but according to the BBC, residents now feel “like they have been forgotten”.

One such survivor, named only as “Pedro, a father of three children – all under the age of 10” pleaded with reporters to “tell the world we are suffering. We don’t know where we are going to sleep”.

In Portugal, numerous football clubs and organisations have started fund-raising efforts, while the embassy of Mozambique in Lisbon is asking for donations of money and food.

Elsewhere, other countries have pledged a total of €52 million in aid – almost half of which has been promised by the United Kingdom.