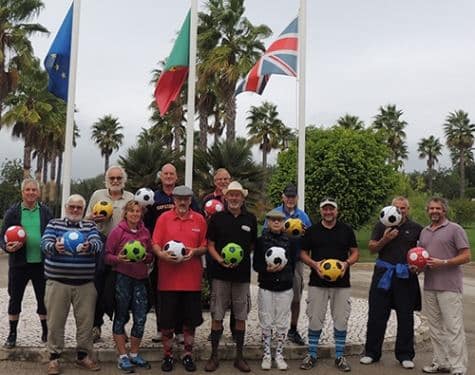 Dr Maria Alice is a consultant in General and Family Medicine and is director of Luzdoc International Medical Service in Praia da Luz, Lagos.

We can certainly say that Michael Phelps personifies the Olympic dream and nobody doubts that he swims like a fish but … what does he have to do with fish ears? He does not have fish ears; humans do not have ears that were made to live in the water like fish do. Let me explain!

I confess that I use Michael Phelps as an example when I want to make children (and others) understand that they should use ear plugs, bands and caps.

Has anyone ever seen this Olympic Hero jumping in the water without any protection? And even more, he never forgets goggles for eye protection from chlorinated water.

“In the summertime when the weather is hot” … it is swimming pool time, for everyone, grown-ups and children.

Sometimes we have doubts about who has more good sense and rational behaviour… Trust me, I have been a doctor in the Algarve for many years and I have seen a lot of ‘irrational holiday behaviour’.

I usually say that people when they go on HOLIDAYS think they enter a state of grace and therefore they can do everything they would not usually do, as nothing bad could possibly happen. It is a holiday after all! Completely wrong. Due to the fact that people do what they do not usually do, anything might go extremely wrong.

The fact is that every year we have a long list of people whose holidays are not as good as they should be because they suffer from an ear infection. It is not nice, not only because ear ache is nasty, but also because they cannot do, for a certain length of time, what they most enjoy, what they came on holiday to a hot climate for: SWIMMING. Many times they cannot even fly back home as scheduled.

Why and how do people get it?

Water normally flows into and out of our ears without causing any problems. We can nearly always shower, bathe, swim and walk in the rain without incident, which is remarkable considering how large and deep an opening the ear provides.

We’re protected by the ear’s shape, which tips fluid out, and by its lining which has acidic properties that protect against bacteria and fungi.

However, when your ear is exposed to excess moisture, water can remain trapped in your ear canal. The skin inside becomes soggy, diluting the acidity that normally prevents infection. When this happens, bacteria and fungi have the ideal environment to grow, as it is warm, and humid, causing a condition known as swimmer’s ear (acute otitis externa, or external otitis).

Swimmer’s ear is an infection of the outer ear and ear canal. It can be associated with a middle ear infection (otitis media) and the eardrum can possibly rupture.

Earwax build-up or blockage also may increase the risk, by trapping water in the ear and increasing the likelihood that you will cut the skin while cleaning the ear.

Other ear problems may also increase the risk of swimmer’s ear, including small ear canals, that do not drain well and chronic middle-ear infections that moisten and perforate the eardrum.

If you are an older adult or have an underlying medical condition such as diabetes, your immune system may be impaired, increasing the risk of swimmer’s ear. If you have poorly managed diabetes, you are at increased risk of developing severe, painful swimmer’s ear that may be difficult to treat.

1. Use earplugs to keep water out of the ears when swimming.

2. Dry the ears thoroughly after swimming or bathing. Dry only the outer ear, never insert your finger or any other object into the ear.

3. Never attempt to dig out excess or hardened earwax with items such as a cotton swab, paper clip or hairpin. Using these can pack material deeper into the ear canal and irritate the thin skin inside the ear.

Nothing should be used without doctor’s advice when children have ear tubes or if children already have swimmer’s ear (acute otitis externa).

Until an ear infection heals, it is important to keep water from getting into the ears, even while showering or bathing.

When your children are pleading to go swimming there is a lot more to think about besides wondering if the pool is ‘clean’. Nowadays most pools are well taken care of and are undoubtedly very clean. The problem is WATER going into ears, any water, pool, sea or even shower water.

I was a school doctor for some time after finishing University and the children that had less ear wax or ear infections were the ones that had less baths or showers, had no holidays at the beach and did not have a house with a swimming pool.

Sorry, just one more thing missing: Do you know that the only thing you are allowed to put inside your ears is your elbows? If only you could …

Consultant in General and Family Medicine