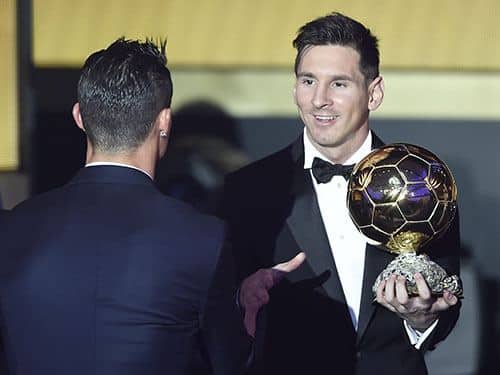 Messi’s Barcelona co-star Neymar got 7.86%, but he really never stood a chance for the award, as CR7 told reporters just a few hours before the ceremony in Zurich on Monday.

“Messi has a lead start on us,” he said.

The reasoning was simple. While Messi scored less goals (58 goals in 57 matches) than Ronaldo (61 in 54), he did guide Barcelona to victories in the Spanish league and cup as well as the UEFA Champions League last season.

Ronaldo, however, was unable to clinch any of the major titles Real Madrid was fighting for, though they did win the UEFA Super Cup and the FIFA Club World Cup.

A radiant Messi accepted his prize saying: “It’s incredible that this is my fifth (Ballon d’Or). It’s much more than anything I dreamed of as a kid,” he added, saying it was “a very special moment after being there in the audience watching Cristiano win”.

Photo: Argentina’s Lionel Messi is congratulated by Portugal’s Cristiano Ronaldo after winning the FIFA Men’s soccer player of the year 2015 prize during the FIFA Ballon d’Or awarding ceremony at the Kongresshaus in Zurich, Switzerland, on January 11.