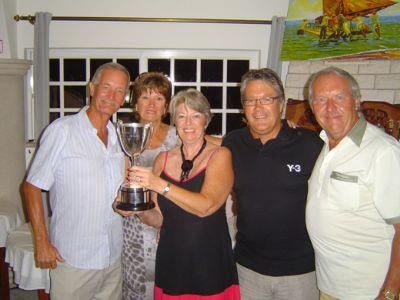 The tournament was won by a team from Gramacho golf club which included Ian Croft, Jill Croft, Steve Fenton and Roy Stanton. The winner’s cup will be displayed at the Gramacho club house.

The competition was followed by a dinner, auction and raffle at the Poço Partido restaurant. Around 150 diners attended the fundraising event and raised 14,870 euros but with donations continuing to come in, the final figure is likely to be 15,000 euros, which will be distributed between the chosen charities for the event.

Trish Quinlan, who lives in the Algarve and is mother of James and trustee of the fund, said: “The support and generosity of our friends is overwhelming and heart warming.  When we lost James, we felt that we had to try to do something positive in his name, and so the Trust was formed in December 2006.

“Since then £50,000 has been donated to our chosen charities and this new amount will go a long way to continuing the work of Help for Heroes, the Army Benevolent Fund, The Back-Up Trust, Meningitus-UK and the Children’s Oncology Department in Lisbon.”

Trish added: “Our golfing friends have proven that their hearts are huge and kindness unbounded.”

Corporate sponsors contributed and displayed their banners and many items were donated for raffle and auction lots.

For further information, please visit the Captain James Philippson Trust Fund website at www.captainjim.org which is available in English.
1″>news