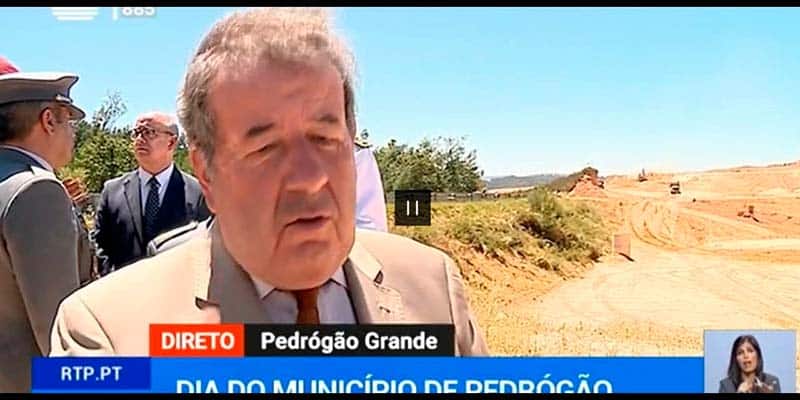 It has taken months of ‘media exposés’ and insinuations but the mayor of Pedrógão Grande – the borough devastated by wildfires that killed 66 people and injured 253 two years ago – has finally been made an official suspect into the long-running probe into alleged irregularities in the way funds have been released for the rebuilding of fire-damaged homes.

Almost a year ago, Visão magazine broke the news that as much as half a million euros had been spent ‘rebuilding homes’ that were not only not damaged in the fires, they hadn’t even been ‘primary residences’ (that is, permanent homes, which were the only properties qualifying for financial aid click here).

TVI confirmed the story in its own research.

Months later he admitted there may have been “one or two cases” where money had fallen into the wrong hands, though he had no knowledge of any of them (click here).

Now, newspapers confirm that the probe that followed the Visão and TVI revelations has cited 43 people as ‘arguidos’ (official suspects), among them Valdemar Alves.

This is not the first time Alves has been cited in a probe relating to the fires.

A previous investigation into whether the fires could have resulted from authorities’ perceived negligence was opened and has since been archived.

There were also allegations that donations to victims of the fires had been mishandled. This investigation too came to nothing.

Contacted for a comment Alves has told journalists that he doesn’t wish to make one.

The fires that began in Pedrógão Grande on June 17 2017 spread to the districts of Leiria, Coimbra and Castelo Branco, and aside from the human misery and tragedies, destroyed around 500 homes – 261 of which were considered ‘primary residences’ – and 50 businesses.

Today, almost two years on, as many as 46 of those homes have been cited for having been ‘rebuilt’ illegally.