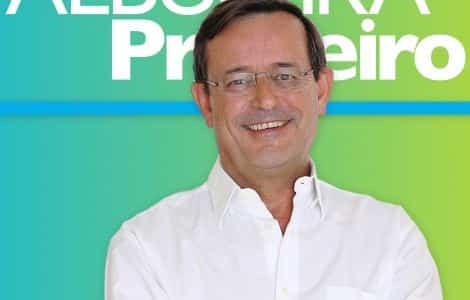 With the council issuing a statement (see below), the region is reacting with shock and real dismay.

60-year-old Silva e Sousa was a powerhouse of work. Only yesterday he took part in a ‘get tough’ meeting over gas and oil drilling, and likened the government’s position to agreeing to produce cocaine for a South American drug cartel (click here).

Says Lusa “he did not resist a massive attack which came around 10pm on Thursday when he was at home”.

Emergency response teams battled to try and save him but death was declared shortly after midnight.

Married with two children, Silva e Sousa was voted overwhelmingly through to a second mandate at the helm of the council in last October’s municipal elections.

He had previously been President of Albufeira’s municipal assembly for three consecutive mandates, at the same time as being a PSD MP (June 2011 to November 2015).

Lusa traces his career in public service after practising law, describing a man with multiple responsibilities:

“He was a farmer, he ran family properties connected to wine production”, and in the past he had been consul for Lithuania, vice-consul for S. Tomé and Príncipe in the Algarve, as well as president of the Algarvian brotherhood of wine lovers and gastronomes, and president of the producers of the irrigation perimeter of V. Benaciate.

Carlos Silva e Sousa had many roles on a political level, the news agency continues: “He was president of the board of PSD/ Albufeira , vice-president of the district organisation and a member of the national council of social democrats.

He was also a very genuine man who will be sorely missed by all those who knew him.

Posting a recent photograph of much happier times over social media, mayor of Monchique Rui André talks of “feeling broken” as well as incredulous. Describing his friend as “courageous, frontal and of enormous human dimension” he said the council leader was also a “reference of integrity and solidarity” always ready “for the construction of happiness which he associated with a more just and balanced society”.

“The mayor of Albufeira has gone but more to the point we have lost a great Man and a great Friend. Rest in Peace Carlos”.

Reporter Elizabete Rodrigues of Sulinformação news website has posted her sadness over social media, saying: “I was only interviewing him a few days ago, at the council building. He was, like always, full of work… we even talked of the need to slow down a bit…”

Writing for the Resident in 2015, I was struck by his generosity giving me his time after a council meeting – even though it was well past 11pm – to explain the ins and outs of a property story.

Albufeira was today confronted with the sudden unexpected death of the President of the municipal council, Carlos Silva e Sousa, 60.

Albufeira has lost a Great Man, honest and open, cheerful and generous and above all always available to everybody.

Through his example of dedication to others, to the public cause, for his inimitable democratic culture, Carlos Silva e Sousa will live in the memory of all those who call Albufeira their home, as well as for those who had the privilege of knowing him personally.

His departure is an irreparable loss for Albufeira. Three days of mourning have been decreed from today, February 23, and the municipality’s flag is now at half mast as a way of honouring the loss of a Great Man.

In this moment of pain for his family, for all the employees of the municipality and for the wider community of the Algarve and Albufeira, the city council will be initiating all possible steps in this hour of sadness to transmit further necessary information.

His sudden death after yet another packed day of public service last Thursday prompted a veritable avalanche of tributes. President of the Republic Marcelo Rebelo de Sousa travelled down to the funeral at the weekend, as did multiple high-ranking MPs and former PSD leader Pedro Passos Coelho. Carlos Silva e Sousa was not simply the Mayor of Albufeira, he was a man of undeniable special qualities. Even those that didn’t know him are now painfully aware the Algarve has lost one of its champions.

Thousands turned out for the funeral last Saturday, many of them still incredulous.

Less than 48 hours earlier, the 60-year-old two-term council leader had been taking part in the watershed “declaration of war” against the government’s insistence on backing oil and gas prospection in the Algarve.

Speaking in Loulé in front of television cameras alongside activists and Socialist counterparts, he stressed: “We have to conclude that we are in front of a decision that goes against public interest” for reasons that have not been “properly justified”.

Aside from the “very strong political consequences” for the government, there are also legal implications, he warned.

It was a short but animated speech uploaded over social media as the event was largely ‘glossed over’ by mainstream news services. But it served to show Carlos Silva e Sousa’s concern and commitment for a region that he loved with a passion.

Taking over the reins of an Albufeira saddled with crippling debt and endless other problems – not least the top floor of an apartment block that was faced with demolition – the lawyer by profession deftly navigated the municipal machine towards calmer waters.

Tributes from his own party lamented the fact that he still had “so much more to give the public cause”.

One of his “grand projects” writes tabloid Correio da Manhã was the drainage project for Albufeira downtown following the town’s “greatest catastrophe” – the devastating floods of November 2015.

Even though everyone thought it impossible at the time, Silva e Sousa’s administration succeeded in getting the town back on its feet for New Year celebrations and the bumper fireworks display that Albufeira has become famous for.

His dedication to improving the lives of local people has been reflected in the sheer weight of messages coming from all quarters and all sides of the political spectrum.

While his friend and mayor of Monchique Rui André described Silva e Sousa as a “reference of integrity and solidarity” always ready “for the construction of happiness which he associated with a more just and balanced society”, the regional PS lauded “a man of causes, a man of good, a friend of his friend” with the consensual bottom line being that the region, even the country, is suddenly a lot poorer.

Adega do Cantor, the winery associated with pop legend Sir Cliff Richard, uploaded photographs of Sir Cliff in the company of Carlos Silva e Sousa saying simply: “We are deeply saddened with the loss of our great Mayor of Albufeira, Dr Carlos Eduardo da Silva e Sousa. With a heavy heart we say farewell to a man of distinguished humanity. We are honoured and blessed to have known him and forever grateful for all his support to the Adega do Cantor, Albufeira and the Algarve region”.

But it was a mayor in France who bestowed the tribute of “visionary”.

Talking to news website Sulinformação, Paulo Marques – president of the association of mayors of Portuguese origin in France – said Silva e Sousa had a very special place in his association’s heart due to Albufeira being the only foreign town that attended the Congress of Presidents of municipal boroughs of Greater Paris last May.

Silva e Sousa’s reasoning was that Albufeira still had a lot to gain from increased French tourism.

He was apparently on the point of becoming a member of the association, and had hosted a ‘working visit’ by 55 French mayors to Albufeira only last November.

As to the cause of Silva e Sousa’s death medical reports confirmed that he suffered a “massive heart attack”.

Fellow PSD mayor of Castro Marim Francisco Amaral has blamed it squarely on “the damned cigarette” adds Correio da Manhã, telling reporters that his friend had told him that he wanted to “give up smoking” because he was “feeling tired”.

A lifetime of public service:

A former ‘pupil’ of President Marcelo, Carlos Silva e Sousa  presided over Albufeira’s municipal assembly for three consecutive mandates, at the same time as being a PSD MP (June 2011 to November 2015) before he took the reins as the town’s mayor.

Lusa listed his multiple roles, describing him also as “a farmer” who ran family properties connected to wine production”.

Declaring three days of mourning last Friday morning, the shocked council – now led by Silva e Sousa’s vice José Carlos Rolo – said that “Albufeira has lost a Great Man, honest and open, cheerful and generous and above all always available to everybody”.

The packed funeral last Saturday saw a massive courtège wind its way through the town’s streets to the Cemitério Novo, as the council suggests “Carlos Silva e Sousa will live in the memory of all those who call Albufeira their home, as well as with those who had the privilege of knowing him personally”.