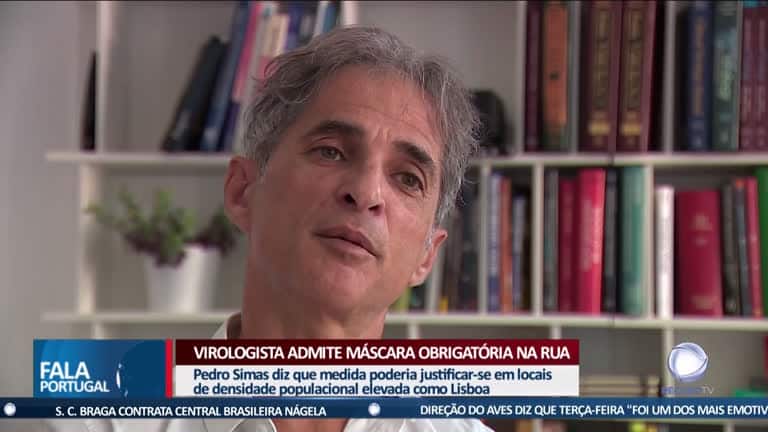 Portuguese virologist Pedro Simas – an internationally renowned expert who has become almost a household name (if not face) here during the pandemic – has given a hugely uplifting press interview in which he predicts that “May will be very different” to the complicated times we are still all experiencing, while June and the rest of the summer “will be practically normal”.

For anyone concerned that the summer might continue to be blighted by dismal news and even further draconian measures, this is an interview to savour (click here).

For those who cannot read Portuguese (or put the text through Google translate), the bottom line of Mr Simas’ message is that focus on the variety of vaccines has been fairly unnecessary.

In his opinion, vaccines can be combined, in principle, because their most important function really ‘is only to create an immune response’. In fact all of them could simply be taken once (“the dose that comes afterwards is a little irrelevant”, he told noticiasaominuto).

Coming days after the head of Pfizer suggested everyone will need ‘booster shots in October’ and then vaccines regularly in the following years, this was a ‘breath of fresh air’ and a return to some semblance of calm.

As Mr Simas explained, the vaccination programme this far has almost completely protected “groups at risk”, meaning “we can tolerate a greater number of community infections now without there being hospital admissions or loss of life”.

While Portugal’s vaccination programme continues (due to global protocols) people most at risk are already covered. Indeed, it has been explained time and again that 96.4% of all Covid deaths in Portugal have come in the over-60s groups. Mr Simas has broken this percentage down even further, suggesting 90% actually occurred in the over-70s (20%) and over 80s (70%). In other words, only 6.4% of deaths were in the under-60s.

In the mindset of this virologist working out of the Institute of Molecular Medicine at the University of Lisbon, “we have already eliminated 90% of mortality” in Portugal.

Regarding the government’s policy of ‘pausing deconfinement’ (as has happened in six boroughs  including Albufeira in the Algarve click here), he is clearly not convinced.

He explained: “We are in the process of constructing herd immunity – not simply through vaccination but also via natural infection which is estimated (to exist) in 13% of the population, meaning 1.3 million people”.

Portugal already has a “wall of immunity”, he said. “We will reach the end of April with nearly all people over the age of 70 vaccinated. This means that 90% of all the mortality we had will have disappeared…”

Indeed, one only has to look at hospital numbers today to see the outbreak in Portugal is no longer causing major issues.

“In May our lives will be very different to what they have been and we will have a practically normal summer. We will be very near herd immunity and perhaps able to deconfine in almost totality”.

Indeed Mr Simas is clearly an expert who does not believe any of us will need to revaccinate in years to come (see below), but his interviewers were keen to understand if Covid-19 “could bring consequences for the future”. This is his reply:

“We do not know because two, three or four years have not yet passed. But I am not very worried about this. Nature can be unpredictable but most of the time it is predictable. What we know is that people who have had severe infection have a much slower recovery and can be left with damage and scarring because they suffered multisystemic involvement of various organs and will have been between life and death. This is the law of life. But to imagine that people who have had asymptomatic infection will come to suffer consequences and chronic or serious diseases in a few years time, I doubt this – because this is a respiratory infection.

“It is clear that there are always rare cases of situations like ‘multisystemic inflammatory syndrome’ which children develop, generally between the ages of four and 15. These are extremely rare and we know very little of what causes them, although there is a de facto association with post-infection phenomena. In other words, a person has an infection – it could be any virus, even a flu, and there is a small percentage of these people who can develop this multisystemic inflammatory syndrome. But to imagine terrible consequences for the central nervous system, cardiac, etc., I don’t believe it. Nature doesn’t work like that. Of course these kinds of infections are appearing more now because we are having the real time experience with millions and millions of people infected (roughly 141 million at the moment). What this means is that it is normal that more cases of these infections would appear”.

As to the requirement for seasonal vaccinations, like annual flu shots offered to the elderly and immuno-compromised, the expert was adamant:

“I don’t see this possibility. After reaching herd immunity this will become an endemic virus, circulating the population like any other coronavirus. This circulation is updating and reinforcing our herd immunity. People may develop colds, but it will be like being vaccinated again. Our immune system is always being updated. Coronavirus evolves genetically, but not like the flu virus, so I don’t think it’s very likely that we will be dependent on vaccines against it”.

The rest of the interview centred on Mr Simas having been chosen by the PSD candidate for Lisbon mayor to coordinate a contingency plan for the capital to prepare for future pandemics. But what the space given to his opinions shows is that there is a move now towards ‘de-escalating’ messages of fear, doom and authoritarian control that have pervaded all forms of media over the last year.

This is an expert at the forefront of Portugal’s fight against Covid-19, and he is positive we are on the right track, with an end in sight.