Portugal Resident
Home Algarve News Mass call to ‘anti-oilers’: this is your chance to be Portugal’s Standing... 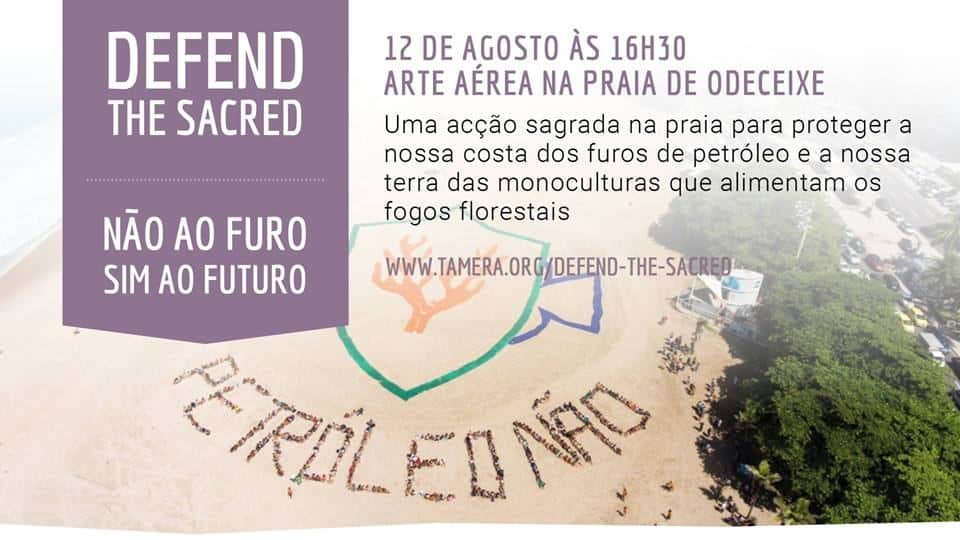 A mass call is going out to everyone in the Algarve who doesn’t want to see the coastline pitted with oil rigs, and dotted with tankers carrying natural gas to refineries.

Saturday August 12 will see a major aerial art event being staged on the beach of Odeceixe, for which at least 500 people are needed.

So far, organisers say they have 260 confirmed, thus the call is for another 240, with any extras extremely welcome.

Standing Rock has become a symbol of “the little people fighting back”, and despite endless ‘failures’ saw a federal judge rule earlier this month that permits authorizing the pipeline – hastily issued by the Trump administration – violated the law “in certain critical respects”.

The fight is far from over, but here a similar legal challenge has been mounted regarding the form in which the law authorising the carving up of Portugal into various concessions was granted – and as the minutiae is considered by the Attorney General’s office, anti-oilers are keen to highlight the issue, during the height of the tourist season.

Thus the “Defend the Sacred” initiative, sub-titled: ‘Não ao Furo, Sim ao Futuro’ (No to wells, yes to the future), brings Sacred Rock activist and filmmaker John Quigley to the Algarve to film an aerial art action – not simply to “help our coast from oil drilling” but also to take a stand over eucalyptus monocultures which “fuel deadly forest fires”.

Powered by Alentejo peace commune Tamera, and backed by citizens groups and environmentalists – including the Algarve’s relentless ASMAA (standing for Algarve Surf and Maritime Activities Association), ALA (standing for Coastal Alentejo for the Environment) and Climáximo (the movement led by climate change activist and journalist João Camargo) – the plan is for a “huge message” to be written on the sands with people’s bodies.

The message will then be filmed from the air, and broadcast worldwide.

It could be the best way of getting Portugal’s fight to save its environment out in the open, to shame the power behind drilling plans – a government that signed up to the Paris climate accord but claims it has no alternative but to honour contracts signed by the last administration.

The event will include “dance, prayers and speeches by LaDonna Bravebull, initiator of the Standing Rock movement, Tamera’s founder Sabine Lichtenfels, José Amarelinho, the Algarve’s fervent anti-oil mayor of Aljezur and Laurinda Seabra, the CEO of ASMAA who has been described as “the Queen of the Algarve’s anti-oil campaign” due to her efforts to highlight the risks of oil and gas exploration which have since led to the formation of so many other anti- groups.

Due to the logistical problems of parking in Odeceixe, Aljezur council is working on a bus schedule, to transport people to the beach from the centre of town.

Further information will become available nearer the date, but in the meantime all people keen to get involved should contact ASMAA via the group’s Facebook page, and watch out for ‘news bulletins’.

Defend the Sacred – Não ao Furo, Sim ao Futuro is scheduled to start at 4.30pm and run till 7pm.