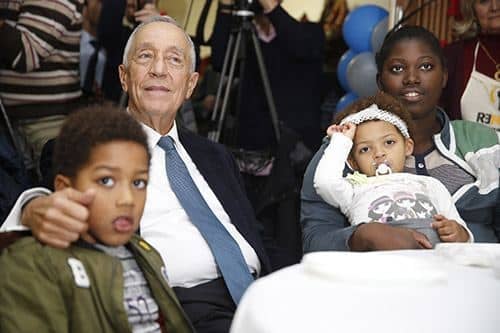 He has visited 20 countries, flown the equivalent of four times round the world, met iconic world leaders – even enchanted Her Majesty the Queen. He has danced with children in Africa, pegged washing for old ladies, donned hospital scrubs to visit the sick and braved the coldest night of the year to visit homeless people in the streets of Lisbon. But what Portugal’s adored president Marcelo Rebelo de Sousa has really done is the stuff of superheroes. Behind all the hugging, kissing, joking and ‘hands-on-head’ jaunty gyrating, he has managed to turn a country back from the brink and towards ‘the promised land’ of economic success and ‘institutional acceptance’.

As Expresso put it on Tuesday, his ascension to the power that predecessor Cavaco Silva once described as “almost no power at all” came when the country was coming to grips with a “three-legged” minority government that every analyst under the sun was predicting would trip itself up at the first hurdle.

The banking system was “mature on the outside, and termite-ridden on the in”, Europe was threatening sanctions, interest rates were rising, and the economy was in free fall. In short, Portugal was descending headlong into hell in a handcart.

“Christ did not come down to earth, but Marcelo climbed to the throne,” writes Expresso’s Pedro Santos Guerreiro in one of the many articles that have come to mark Marcelo’s first year at the presidential palace of Belém. “Marcelo would be, was and is interventionist.”

All the hugging, kissing, joking and smiling has bewitched the national psyche to the point that the Portuguese, who a year ago were filled with trepidation, “today feel the love that is in the air” (Expresso columnist Paulo Barradas).

While over on the other side of the Pond another newly-elected head of state has incited very different feelings – both in his own country and around the world – Portugal’s ‘Marvellous Marcelo’ has transformed Portugal’s O (used in duplicate not so long ago to describe the country as POORTUGAL) into an O for Optimism, and a big one at that.

Giving his first major interview since taking office, the garrulous head of state told SIC television that the secret is in ‘realistic optimism’. If you believe, as he says he believes, that “there are no impasses in politics”, then there are always solutions: whether they have been found or whether they still need to be found.

So, other than the ‘feel good factor’, what has Marvellous Marcelo actually achieved?

All papers, whether pro- or anti-government, agree he has lanced the boil of “political tensions” – the atmosphere post-2015’s inconclusive elections in which every political party was frothing at each other like pitbulls on steroids.

In ‘embracing’ the efforts of prime minister António Costa, former PSD party stalwart Marcelo has helped another politician graced with the stardust spangle of superpowers to succeed in what so many said would be impossible.

Costa’s government, far from falling in a tangle of left feet, has gone from strength to strength: investment is increasing, public spending is showing improvements, the excessive deficit barrier has been broken and the baying Opposition has not been vindicated by the calamities it forecast 12 months ago.

True, there are still serious hurdles ahead. Novo Banco has not been sold despite multiple deadlines – and no-one really knows what to do about it. The banking sector remains fairly toxic. The wrangle over how to finance the increase in the national minimum wage continues after MPs rejected a proposal to reduce employers’ TSU (Taxa Social Única) commitments, and of course there is the never-ending issue of what is now over €237 billion owed to international creditors.

But the extraordinary combination of a ‘realistic optimist’ and an irritating one (as Costa has been described) has managed to lift the grey off the national landscape, magicked the ‘cup half empty’ into one that promises to fill up fast and (with luck) continue to satisfy creditors who will be descending on Lisbon in force as early as Thursday.

Eurogroup evaluates whether Portugal can repay its debts

In the words of former finance minister Maria Luís Albuquerque, it is actually “mathematically impossible” to suggest Portugal could ever pay back its massive debts to the IMF, European Commission and European Central Bank – but the combination of Costa leading the government and Marcelo backing him to the hilt will do its damndest to persuade them otherwise. They will almost certainly succeed.

The worst Eurogroup moneymen are likely to do is say they are confident in principle that Portugal is heading in the right direction, although of course more could be done to reduce inherent risks.

Portugal’s ‘luck’ is that there are really too many other problems ongoing in Europe – and the rest of the world – for technocrats to make a song and dance about a country that has emerged from deep depression to have citizens smiling once again, even if this has been helped by a huge dose of optimism.

Critics could say Marcelo is simply Portugal’s Prozac, encouraging people to see their future through rose-tinted spectacles when really everything is pretty much the same – except that things are, excruciatingly slowly, getting better.

Tourism, particularly, is the wind beneath Portugal’s recovery, and last year’s record figures along with the national team’s heart-lifting wonderful performance in the Euro championships have meant that no one but the most curmudgeonly critic could say 2016 was an uneventful year.

Marcelo’s ‘realistic optimism’ simply made the best of it, and chances are it will do just the same in 2017 and beyond.

Photo: President Marcelo during a dinner event at the Re-Food headquarters in Lisbon in December last year. Re-Food is an association fighting hunger across Portugal