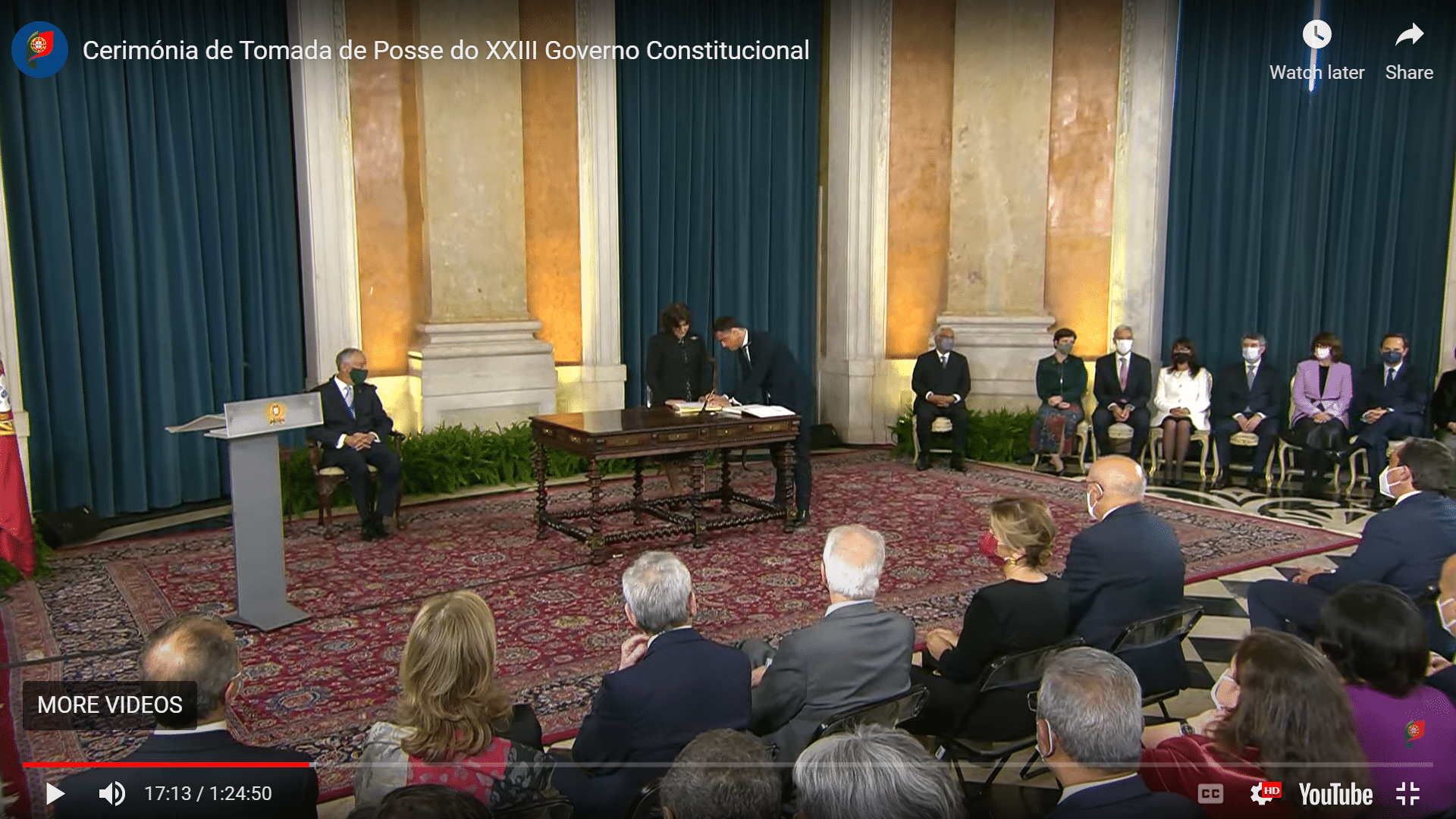 Absolute majority “not synonymous with dictatorship”

President Marcelo put the cherry on the cake of all the surprises of Portugal’s new-look Socialist government by warning the PM publicly in the speech he gave to mark the occasion today that Mr Costa had better not be thinking of leaving in the middle of what is a four and a half year mandate.

In fact, Marcelo didn’t stop there. The country’s head of State who has already said he would certainly have chosen a different format for the new executive, “left the prime minister with a number of messages”, explain reports.

Beginning with a 15-minute discourse on the war in Ukraine, and how much the world has changed in the last few horror-filled weeks, the president moved back to the national stage, and what it means to have an ‘absolute majority’ for Mr Costa’s Socialist government.

It “is not synonymous with dictatorship”, he said. It simply allows the government “to do what has to be done”.

This includes “all dialogues” with ‘interested parties’: “with entities and employers”.

An absolute majority does not give the government “absolute power”, he reiterated – nor does it give Mr Costa the political leeway he might believe he has should he be enticed to a ‘different job’ (in Europe, for example).

Marcelo did not say this exactly. His words were that “it would not be acceptable, I am sure you know, that this face, this face that won (the Socialist’s absolute majority) ends up being substituted by another half way down the line”… Seeing the job through to the end “is the price of personal victories”, he said.

Bottom line: the Portuguese chose to give PS Socialists the majority they have. “They could have chosen to maintain what was already in place (a minority Socialist government buoyed up by the more radical left); they could have changed to a majority in political areas corresponding to the (PSD) government from 2011-2015, or they could have gone for a situation of balance between the most-voted Portuguese parties. They chose a different path”, said the president – a path that now sees a right-wing nationalist party very much in 3rd place in parliament now, the ‘radical left’ truncated and the more centre-right CDS completely absent.

If such a speech was a surprise for Mr Costa, he certainly didn’t show it.

He bounced straight into his rhythm, agreeing wholeheartedly that the country “expects a government that resolves problems and creates opportunities”.

His four ‘main objectives’ for what will be his third and final mandate are “to respond to the climate emergency; assure digital transition; counter the ‘demographic winter’ (meaning the lop-sided population with too few children being born and large numbers of elderly) and to combat inequalities”.

“Circumstances have changed”, he said. “The current moment is adverse, but we will not desist in the objectives we proposed, nor will we forget the promises we assumed”.

Fine words which, to be fair, will mean very little to the average family struggling to make ends meet as ‘the current moment of adversity’ has so affected the everyday cost of living.

Nevertheless, Mr Costa seems convinced his government will be able to ‘turn the page’ (which has been referred to so many times in recent months).

Winding himself up to the point of crescendo he said the younger generation in this country “is the best prepared in the history of this country”, and “has the greatest capacity to transform it”.

“Change depends on you, and only with you will we be able to grow. This is the moment to write your own history!”

Mr Costa does give very ‘upbeat, positive messages’ – which is possibly why he won the PS such a fabulous majority. But when you analyse them, they are a little light on content.

“The Portuguese resolved the politic crisis in the elections. Stability until 2026 is not synonymous with immobility but will see ambition, and the opportunity to follow through.”

Diário de Notícias’ coverage of this ‘big day’ continues, with the smaller parties now reacting, saying what they think of this, and what they think of that. But perhaps the most telling excerpt was the one that said: “Marcelo was the first to leave, and didn’t give any statements to the press.