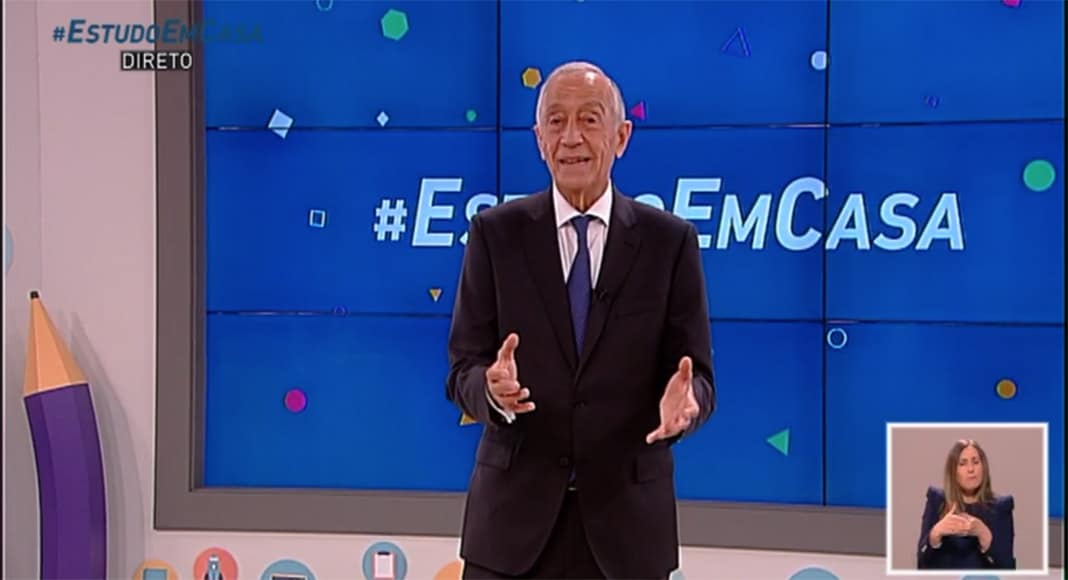 As the Black Lives Matter movement has sparked protests and vandalism throughout the world, President Marcelo has spoken out against what he called ‘the radicalisation of Portuguese society’.

“We’re living in a pandemic”, he told reporters after recording a live lesson for schoolchildren still distance learning on their home computers.

“And at the moment where we have an economic and social crisis, we’re gratuitously adding radicalisation of Portuguese society to the mix”.

“Radicalisation fuels radicalisation”… It does not “address problems or define policies against inequalities”, he stressed.

“Do the Portuguese gain anything from gratuitous, unintelligent radicalisation? I don’t think so…”

The ‘people’s president’ was talking in the context of the daubing of a statue of Father António Vieira, “one of the great figures of this country” who “fought for independence, was a great man, progressive in his time and persecuted by Portuguese colonists and the court”.

Daubing the statue in red showed “not simply stupidity but imbecility”, said Marcelo, accepting that in this particular case the “ignorance could have been well intentioned” but it still showed that whoever vandalised the statue “was an imbecile”.

Racism most certainly exists in Portugal, the head of State admitted. He said he doesn’t know “if society as a whole in Portugal is racist. But that there are racist sectors and xenophobes in Portugal, yes, there are”.

What worries him however much more is that society might allow itself to be whipped into the kind of frenzy that has been witnessed in London, the United States and other cities in Europe.

Addressing the current ‘vogue’ for somehow ‘restoring justice to history’ by toppling statues, he said: “I am the head of a State with a history made up of victories and defeats, of things that were good in the light of their times and bad now, of things that were bad at the time and good now. We have to accept our History: warts and all. Judging it by the light of today is a mistake”.

“Personalities that mark our History have to be respected and considered in the light of the times in which they lived. There is no justification today – even in the combat of racism or any other kind of combat – to destroy History and the testimonies of personalities in our History”.

If there was we would have to start with “Dom Afonoso Henriques for the persecution of Muslims, then to the First Dynasty and everything else, up to the Tower of Belém”. Or should we go even further back, to the times of the Romans and Greeks, he questioned.

“Destroying History is in theory very easy, but it’s an exercise that won’t change the lives of those who are discriminated against, who live ‘isolated’. The way to really struggle against racism and xenophobia is to create conditions, today and for the future, that reduce inequality.

“It’s not in destroying History, but in creating a different History”.

On the subject of discrimination, Marcelo said there was more than racism to tackle in Portugal, namely poverty.

“We have two million people on the breadline in Portugal. I have seen how the people live in the Bairro de Jamaica” (a ghettoised neighbourhood that has been struggling to stem infections of Covid-19 due to the serious inadequacies of conditions in which so many families live).

The way forwards, in his opinion, is to “combat racism and other discrimination and create conditions to reduce all these inequalities”.

It was yet another apparently off-the-cuff analysis that cut right to the chase and is almost certain to have resonated with his legions of supporters.

The ‘vandalism’ of statues in Portugal on the wings of unrest elsewhere has been very limited so far, and easily erasable.

The municipal council of Lisbon restored the statue of Father António Vieira to its ‘former glory’, uploading photographs of the vigorous make-over onto Twitter, with the message that any form of vandalism in the city is ‘inadmissible’.

But who was Father António Vieira, and why has his statue been ‘selected’ for ignominy?

This is where it actually gets ‘interesting’. Three years ago, when the statue was unveiled in Largo Trindade Coelho it was ‘protected by a group of Neo-nazis’ explains Público, who wanted to stop demonstrators laying flowers at its feet.

The reason for the flowers was that the work also depicts three semi-naked Brazilian ‘native’ children.

Demonstrators were basing their ‘protest’ on the fact that more than six million Africans were enslaved during ‘Portuguese transatlantic traffic’ “with the collaboration of the Church”, of which of course Father António was a member, said Público.

But the Jesuit priest was clearly not a slave-master, nor was he anti-human rights. Indeed he was the opposite. Wikipedia describes a man who “advocated the creation of companies of commerce, denounced as unchristian a society which discriminated against New Christians (Muslim and Jewish converts), called for the reform of the procedure of the Inquisition and the admission of Jewish and foreign traders”.

In other words, Father António Vieira was a latter-day anti-racist himself, and this is almost certainly why small semi-naked native children are depicted the feet of his commemorative statue.

It is also almost certainly why President Marcelo thinks that whoever daubed the statue and wrote the words ‘discolonise’ on it was an imbecile.