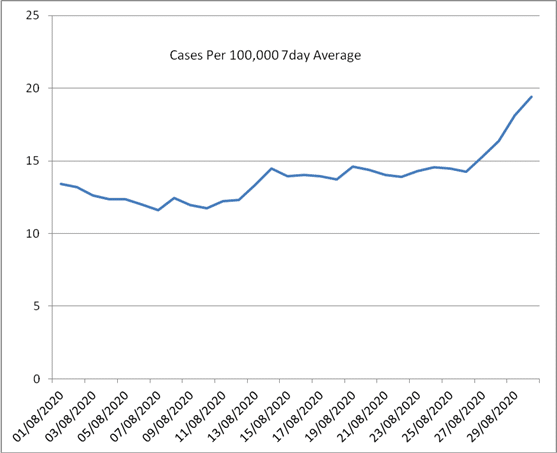 President Marcelo in Monchique on Sunday for another of his promotional trips to the Algarve told reporters that there is “no justification” for reverting the decision to grant Portugal an air corridor with UK. Indeed the number of infections in the Algarve – in spite of the recent spike in Loulé – are “residual”, he said.

But British authorities are said to be almost on the point of pulling the travel plug.

The Times has given a date by which it believes the corridor will come crashing down: Saturday September 5 – while the Mail has cited UK travel consultancy boss Paul Charles saying Portugal “will need to see a miracle drop in case numbers by Thursday” if the coveted corridor is to be kept open.

Paul Charles’ opinion is that Portugal has become “a victim of its own success”.

The minute infection numbers were deemed ‘safe’ for Britons to travel, they arrived en-masse – and almost immediately (as can be seen from the graph above) case numbers started to rise.

The country is so close to the British ‘limit’ of 20 that an announcement that holidays have yet again been blighted seems inevitable.

But as the Times stresses airlines are putting their oar in too now, “renewing pleas for the government to introduce Covid-19 tests at airports as an alternative to quarantine”.

Heathrow has set up a testing facility that can screen up to 13,000 passengers a day for Covid-19 although it will not open until ministers allow those with a negative result to skip the mandatory 14-days in self-isolation, says the paper.

Thus the ‘agony’ persists as the Algarve particularly is believed to have well over 30,000 Brits already here on holiday with thousands more booked to come in September.