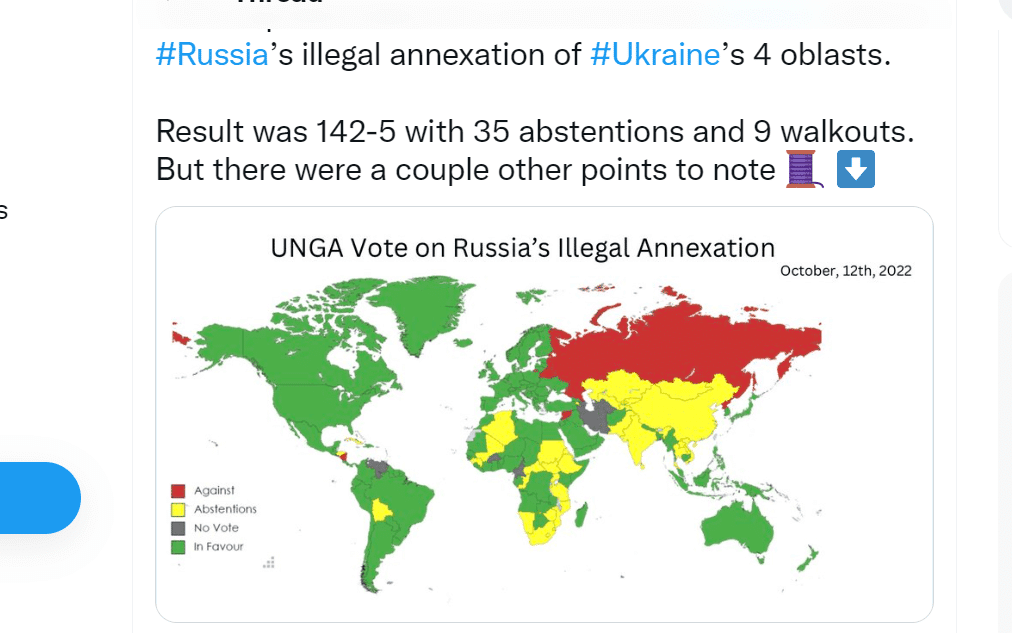 In a statement published on his official website, the president said the vote – 143 in favour, 5 against with 35 abstentions –  “expressed a very broad rejection” of Russia’s aggression against Ukraine, and showed the “stability of the firm global rejection of the violation of international law, security and peace”.

Today, at the 5th Lisbon Conference at the Calouste Gulbenkian Foundation, on the theme “Towards a New World Order?”, Marcelo referred against to the resolution approved last night, saying efforts are needed to “undo the supposed cohesion between autocracies”.

The president’s ‘solution’ is for discussions on the issue of democracies v. autocracies,  “with an extra dose of sophistication and realism”.

In his opinion, the “supposed cohesion between autocracies” has been “patent” in recent or current abstentions “in relation to the behaviour of the Russian Federation”.

Yesterday’s vote, by contrast, “confirmed a very important trend regarding the inevitability of certain votes, when it comes to the minimum of respect for international law in critical cases of too serious global consequences.

“There autocratic solidarities stop, with only the thought of the application of analogous conducts in also analogous situations that concern those who are called to vote.”

The resolution adopted by the UN General Assembly, condemning the annexations, was opposed by only Belarus, North Korea, Nicaragua and Syria, apart from the Russian Federation itself.

China and India were among 35 UN member states that abstained.

Sao Tomé and Principe was one of 10 countries that did not participate in the vote.

As Euronews has explained, “among surprise supporters of Wednesday evening’s resolutions were the ‘yes’ votes from Saudi Arabia, the United Arab Emirates and other members of the Gulf Cooperation Council, as well as Brazil.

Russia’s UN ambassador Vassily Nebenzia had appealed to countries to vote against the resolution, denouncing its sponsors as “unscrupulous Western blackmailers.”

Says Euronews, the Russians were furious with the results – while Ukraine’s UN ambassador Sergiy Kyslytsya recognise them for being as “amazing” as they were. It was “a historic moment”, he said.

The world is “more united and more determined than ever to hold Russia accountable for its violations”, said a statement following the vote by US president Joe Biden.