Four men are on the run in Lisbon after a terrifying gun battle that saw two police agents shot in the head, one in the hand and two civilians caught in the crossfire seriously injured.

As PJ police track the known offenders to ground, the female civilians and one of the police agents remain in hospital.

All have undergone surgery, but their conditions are said to be stable, and non-life-threatening.

The other two agents have already been discharged.

According to national tabloid Correio da Manhã, the incident is causing police to consider rethinking the way they police the problematic neighbourhood of Ameiroeira where less than 50% of residents are in work and where over 15% “don’t know how to read or write”.

“What happened in Ameixoeira was something that keeps repeating. We have to reevaluate what we want from that kind of policing, and we have to bolster Lisbon’s intervention unit, as these are the guys who are pushed to the limit right now,” Mário Andrade, president of the professional police syndicate, told the paper.

The shootout – between two sides of a warring family – took place on Tuesday evening, just after 7.30pm.

Paulo Rodrigues, president of the PSP’s police union ASPP, said: “Scenarios like this are becoming more and more commonplace. A simple complaint about noise can end like this.”

Not so long ago, criminals used to run when police showed up, he added. “Now they don’t. And they have guns,” he said.

This is exactly what happened to the three PSP agents, who ended up having to barricade themselves into a nearby grocer’s shop as bullets flew everywhere.

Cidália Caldas, a local who was at home in her apartment, told CM: “When I heard the shots, I went to the window. Pellets were hitting my windows and I ended up being hit in the face. I thought I was going to die. My face was covered in blood. I don’t know who shot me”.

Another resident, whose name was given as Samaritana, said: “As soon as I heard the shots, I shut myself indoors. From my window I could see Salete (one of the women caught in the crossfire) lying on the ground, covered in blood. I thought: “It could have been a child…”

As the ‘messy crime scene’ has been studied as far as possible, and bullets collected, it is little wonder that a recent investigation by CM has revealed that Lisbon is one of the least favourite areas in the country’s police forces Click Here.

The study claimed there are only 10 police willing to be transferred to the capital, while there are queues of agents waiting to leave.

The men allegedly behind Tuesday’s bloodbath escaped in a VW Golf, writes CM.

Their beef is an “old one”, the paper adds, based on a ‘falling out’ between an uncle and a nephew. 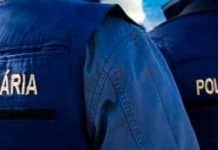 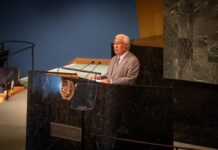