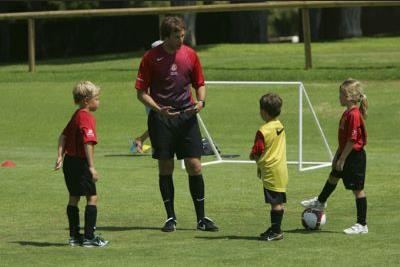 One of the most successful premiership clubs from the UK, Manchester United, and renowned Portuguese trainer Carlos Queiroz will be hosting two training camps at Vale do Lobo, near Almancil, in August and there is still time to register for a place at these prestigious schools.

The first camp is to be held from Monday (August 3) until August 7 and the second from August 17 until August 21.

Both camps are open to children aged from six to 16 of all ability levels and often children with remarkable football skills shine through in the schools.

Manchester United FC and Carlos Queiroz, who trained Portuguese international star Luís Figo, already have an established presence in the Algarve, with previous training camps having been hosted at Vale do lobo as well as some of their top players staying in the region for holidays.

During the training camp, children will have a structured programme of fun activities to improve their technical skills as well as matches and training methods similar to those used by professional Manchester United players.

Children will also be able to take part in a football tournament on the last day of their training camp, which will be held at the Algarve Stadium, which hosts premiership teams who visit the region.

As an extra bonus, children could be in with a chance of winning a trip to Manchester to take part in its UK training school.

Children will also be given mid-morning and mid-afternoon snacks every day.

The first camp must be booked by today (Friday), while the closing date for the second camp is August 14.