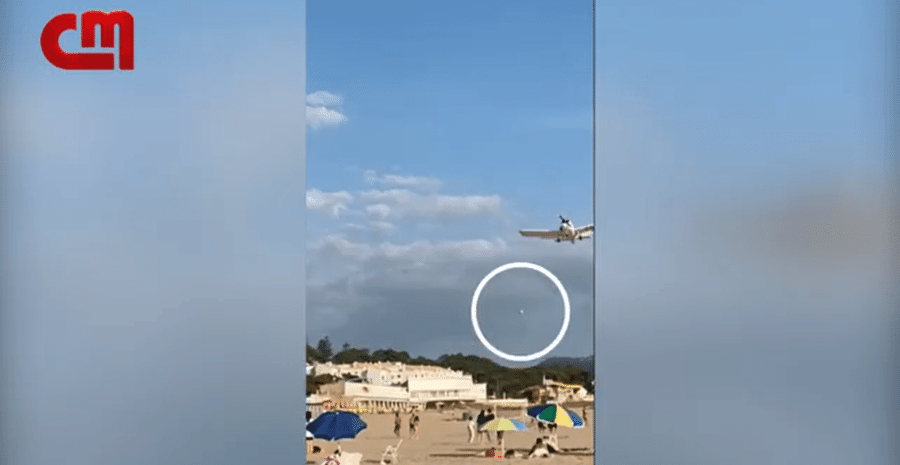 A 30-year-old man is facing criminal prosecution after hitting the wing of a low-flying plane with a football.

The bizarre incident happened on Praia das Maças, in the borough of Sintra, last Sunday.

The young man was apparently in the company of family members and friends. There is nothing to suggest he kicked the football out of any kind of malice; more that he was just ‘having a bit of fun’. But the reality is that the ball hit the wing of a plane involved in a religious event (in which the man was not participating).

Explain reports, the plane was in the process of releasing flower petals onto the beach (and thus flying low).

The young man was seen kicking the ball in its direction. The first two kicks missed, but the third caught one of the wings.

“The pilot recovered balance, admitting later that had the ball  hit the propeller he may not have been able to avoid crashing into the roughly 5,000 people on the sands”, says Correio da Manhã (essentially milking the situation to its worst possible outcome).

The truth is that ‘nothing happened’ (beyond the ball coming into contact with a wing, and the pilot ‘recovering balance’). To be fair, a video clip of the impact does not even show the plane wobble. But people in the crowds below “denounced” what CM calls “the attack” to Municipal Police, and the footballing aficionado found himself surrounded, outnumbered, and arrested.

“Interrogated by agents of Sintra’s Municipal Police, the 30-year-old man identified over the attack on the airplane at Praia das Maças did not present any credible justification for the act practiced”, adds the paper.