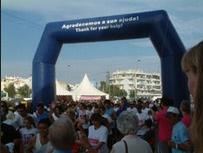 MAMAMARATONA 6 proved an enormous success on Sunday, with 1,150 people officially registering to take part, a whopping 400 more than last year.

In fact, the number is believed to be even higher, due to the hundreds of elderly people transported by coach to the event by several local councils in order to walk the route.

This annual event, now in its sixth year, is organised to support the fight against breast cancer in the Algarve and, once again, the route started and finished at Portimão’s ExpoArade, the fairs and exhibitions centre, which hosted the Better Living in Portugal Exhibition (BLiP) over the same weekend. Those taking part in Mamamaratona6 could choose their distance according to their ability – five or eight km.

On the day itself, the total amount raised stood at 6,288 euros, but there is still a considerable amount of sponsorship money still to come in, which could boost the figure to a much as 10,000 euros.

In addition to the registration fees, donations and sponsorship monies, funds were also raised through the sale of T-Shirts, pens and pink breast cancer bracelets.

“We did a roaring trade with the T-Shirts,” Maria de Lurdes of the Associação Oncológica do Algarve (AOA), the organisers of the event told The Resident. “By the end of the day we had completely sold out, people were even snapping up Mamamaratona T-Shirts from previous years, which were on special offer, it was amazing,” she said.

The first man over the finishing line was former Portuguese national champion at various distances, António Fortunato, who ran five km in 18 minutes and the first woman was Elly van Hulst, who was followed by Urbana Santos.

As reported in last week’s edition of The Resident, various well-known former national and international athletes turned up to take part in Mamamaratona6 including Elly van Hulst, Ana Dias, Carlos Cabral, Jorge Costa and Fernando Mamede, to mention just a few. And, also taking part again this year was none other than the Civil Governor of the Algarve, António Pina.

All monies raised from Mamamaratona6 will go to support the building of accommodation near the Radiotherapy Unit in Faro for patients undergoing radiotherapy treatment, who do not live nearby. Land has already been donated by Faro Câmara for this building and now funding is needed to design, build and furnish the accommodation centre.

For further information about AOA and its projects visit www.aoa.pt or call 289 807 531.

The annual Ladbrooks dinner was once again a roaring success. This year, Vi organised a country and western dinner at their home to raise money to go towards Mamamaratona6. Dr Santos Pereira, president of the AOA and his wife Maria de Lurdes attended the dinner, which raised a total of 227 euros.