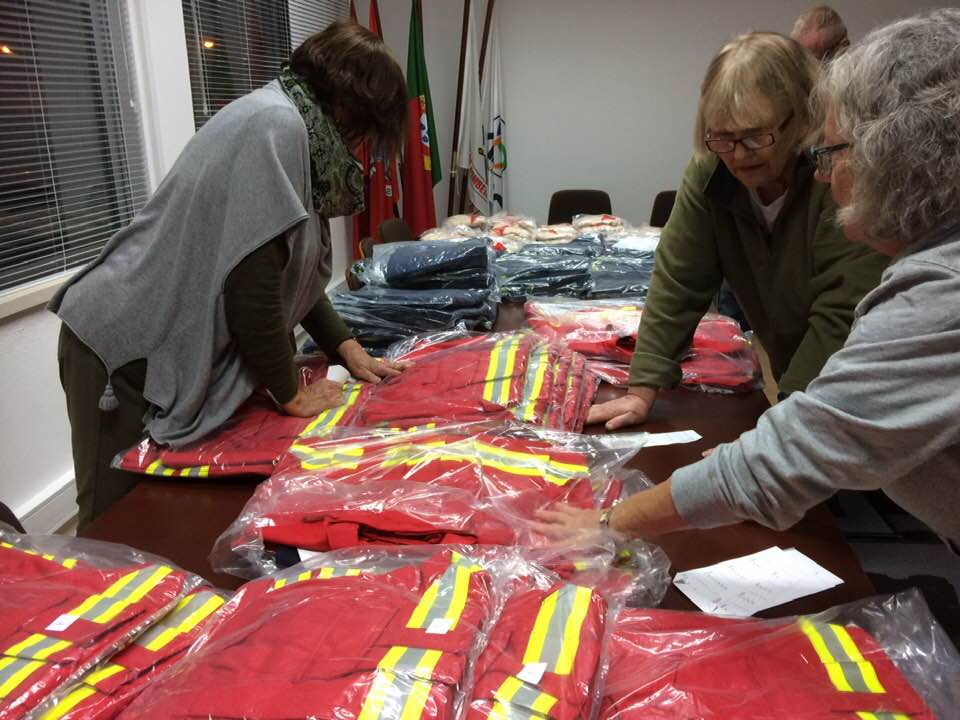 Anyone who thinks Facebook is a waste of time – a vehicle for people happiest in front of their own mirrors – hasn’t discovered “forest fire alert”, or to give the page its full title: “Associacao Alerta de incendio florestal, forest fire alert”.

In two jam-packed years the page operating in English has become the first point of call for anyone who sees smoke rising near their homes and worries that it could be coming their way.

Manned by a team of volunteers from 8am to 10pm every day, ‘forest fire alert’ supplies key information ‘as things happen on the ground’ during the hottest months.

While 15 volunteers run the online admin in a shift-system, members of the committee are on the road, ferrying all kinds of supplies – from dry socks to burns cream, energy bars, water and tetrapaks – to where they are needed.

And somewhere ‘in between’, the association’s British founders find time to ‘fundraise’, liaise with fire stations abroad with a view to donations of machinery and equipment, and even help other causes (like the campaign by AFPOP to supply Algarve fire stations with defibrillators).

There is no time for language ‘barriers’ in this effort to help those who are battling to help the rest – and in the words of Silves fire commander António Nunes “firefighters feel really supported”.

Coming at a time when nationally firefighters feel anything but supported by a government that does not even give them autonomy (see story on page….), these words make all the difference.

Friends rapidly came ‘on board’ and over horrendous blazes that raged for a week in Monchique in 2016 ‘the association was born’.

Two years on, and it is now firmly ‘part of Algarve life’.

We met Debby and a handful of volunteers outside Silves fire station on an otherwise dismal damp evening. The mission was to sort through a stack of new uniforms purchased for firefighters at 13 local fire stations.
So far this year, the association has managed to pay for over 80 full uniforms (jackets, trousers, t-shirts, Goretex boots and balaclavas) each costing around €350.

As the team sorts items into piles for each station, clipboards ticking off ‘large’, ‘small’ and ‘extra large’ to make sure the right sizes go to the right places, Debby tells Commander Nunes that the association now has the money to buy 30 further uniforms.

António is delighted. “Every firefighter should have two uniforms”, he tells us. “They need ‘spares’ for when things are damaged, or soaked, or just filthy. But this rarely happens. With donations like this, we can use the money we would have spent on trying to buy replacement uniforms for other things. It’s a wonderful help”.

He showed us some of the ‘other things’ that have come as a result of the association’s forest fire alert page: heat-seeking hand-held thermic cameras vital to firefighters rescuing victims from burning buildings clogged with smoke.

House fires, though, are the kind the page does not get otherwise involved with – the focus being
large wildfires – the kind that burn for days and see fire stations ‘running on empty’.

“Those are the times stations need all the help they can get”, Debby explains. “We’ve managed to get some good relationships going. Commanders tell us exactly what they need – and then we go out and get it”.

Primark, C&A, Iceland – businesses have all been brought on board so that the association can get the best deals going.

In this year’s monster fire in Monchique, for example, Primark and C&A donated old stock to help both firefighters and their victims – dozens of which had to be evacuated to Portimão in August “with nothing more than the clothes they were standing in”.

And in the thick of the fires, “donations flooded in”, either from individuals or organisations and restaurants that held special events.

A particular ‘stalwart’ for the group that now has almost 7000 members has been the Olive Branch, in Messines. But much has been powered by the simple presence on Facebook – a social media tool that many expats still try to avoid.

“That’s the only problem we face”, said committee member and nurse Louise Semião, herself the mother of a volunteer firefighter. “People who aren’t on Facebook don’t know about us. They don’t know what we do, and they don’t understand how they can help”.

Thus the purpose of this story – to introduce ‘Associação Alerta de Incéndio florestal’, to explain that it is an expat led group that “welcomes new volunteers”, and to show that when times get tough, it can make all the difference.

Even if you still think Facebook ‘isn’t for you’, joining for the sake of keeping up to date with wildfires as they break out along the Algarve (and in the neighbouring boroughs of Almodóvar, Mértola, Odemira and Ourique), and finding out what’s needed by the men and women responding to them, could also make all the difference.

“We have always been a family in the Algarve”, António Nunes describes the bond between the region’s 13 corporations of Bombeiros Voluntários. “But with these people, we have become a happier family. The influence has worked through in different ways, but in a way, it has helped the ‘bombeiros’ come into the 21st century”.

Meantime, just to re-emphasise how Facebook can work to boost the image of Portuguese firefighters, the stunning mural painted on a wall at Silves Fire Station has now been ‘shared’ by over half a million people all over the world. Artist ‘Asus’ (real name Filipe Neves) has also received commissions from fire stations near Lisbon and the Alentejo.

Facebook may well promote a ‘load of old rubbish’ and endless fake news, but for firefighters in the Algarve it has proved a gamechanger.