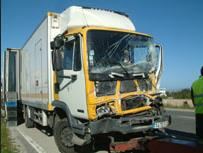 AN ACCIDENT between a lorry and a truck on the EN125 junction opposite the International school of the Algarve in Porches destroyed the two vehicles and left one driver with minor injuries on Monday.

The Portuguese driver of the lorry belonging to an Albufeira-based poultry company was transported to the Barlavento hospital in Portimão by ambulance and was found to have suffered minor injuries to his feet.

A spokesman for the Brigada de Trânsito, the traffic police, told The Resident at the scene: “The accident occurred around 7.35am. We believe that the collision happened because one of the drivers did not respect the Highway Code.”

A spokesman for the poultry company told The Resident on Wednesday: “The driver was treated for shock and bruised toes and was discharged from the hospital on the same day. He is driving again.”

According to a new project presented by the Prime Minister, José Sócrates, and Public Works Minister Mário Lino in Mexilhoeira Grande, Portimão, on March 23, accidents such as this will soon be greatly reduced along the EN125.

José Sócrates said that the project for the complete renovation of the EN125 road, to be called Concessão Algarve Litoral and which crosses 14 Algarve counties, should be approved by the end of 2008, with the work being carried out during the following two years.

In total, 273km of road will be redeveloped in the project, including 157.5km of renewal works, 29.5km of new constructed roads and 86km of maintenance and restoration. The project has been praised by opposition party politicians and other regional associations including NERA – Associação Empresarial da Região do Algarve, the association of businesses in the Algarve region.

A statement issued by NERA said: “The decision to totally renovate the EN125 is good news for the Algarve and for the country.” The statement also highlighted the decision made by the government which said it would not impose tolls on the A22 Via do Infante motorway.

Loulé Câmara President, Seruca Emídio, however, has made a formal complaint criticising the EN125’s redevelopment proposal.  The complaint focuses on the exclusion of Loulé’s north ring road, the Circular Norte, in the Concessão Algarve Litoral project, which is expected to cost 150 million euros and cut road deaths by 35 per cent.

A downloadable file detailing the EN125 renovation plans can be found on The Resident website by clicking on the flashing button on the top right of the page.