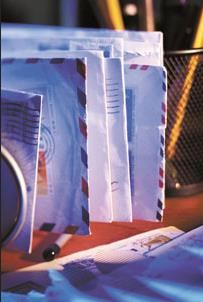 THE PORTUGUESE national postal service CTT handles more than six million items of post every day, with more than 2,000 of these items never reaching their destination, according to statistics revealed by a spokesman from the national postal refuse.

One reader told The Resident that two parcels sent via registered post from the same branch of CTT in Moncarapacho in October and November 2007 never reached their destination. The reader said that when he returned to the same branch to complain, he was given little help and is still waiting for a reply and compensation from CTT.

For several years now, readers of The Resident have sent complaints about post not being delivered, which we previously investigated and wrote articles about in the editions of July 27, 2006, February 4, 2005 and October 3, 2003.

Following renewed complaints about the loss of registered post, The Resident contacted the CTT to find out what can be done when these items are lost.

A spokesman for the CTT told The Resident: “Anyone who has sent a registered parcel or letter and would like to locate it can contact our helpline on 707 262 626,” adding: “English speaking residents can also telephone as we have staff who speak English.”

When asked for the most recent statistics for undelivered post, Fernando Marante, the head of the CTT’s press department, told The Resident: “In terms of European statistics for lost mail, the Portuguese postal service is not as bad as others, including the British Royal Mail, for losing items.”

However, at the time of going to press, the European statistics had not been made available to The Resident.

All unclaimed and undelivered post in Portugal is eventually sent to a central postal refuse in Campo Grande, Lisbon, which receives around 2,000 items each day. As a last resort to finding the destination of these items, the mail is allowed to be opened by law in the presence of at least two out of the three personnel legally allowed to do this.

Unclaimed items that are of value are sold at auction, normal mail is destroyed after one month and registered mail is stored for one year before being destroyed. The next auction will take place at the postal refuse in Lisbon on April 17 from 9am.

For more information, or to enquire whether an undelivered item is being held, please telephone 217 991 373.