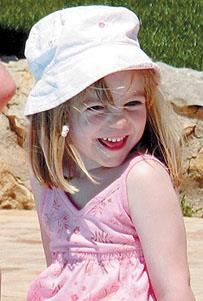 A RETIRED civil servant in Dorset has claimed he saw Madeleine McCann, who disappeared from Praia da Luz 302 days ago, in the care of a Portuguese couple.

Alan Cameron, who is 66, told British newspaper the Sunday Express on February 24 he was shocked when a couple came to look at garden furniture at his house, which he had advertised in a local newspaper, and had a child which looked like Madeleine.

As police launched an enquiry, Alan Cameron said: “Straight away they struck me as odd. The woman said she was Italian but I know Italy well and they weren’t speaking Italian, they were speaking fluent Portuguese.”

“The man had a few days’ growth on his face and was wearing filthy clothes. He told me they ran a language centre in Weymouth, but then the woman hit him and told him to be quiet.”Alan Cameron also said that the couple apparently tried to cover the little girl’s face with her hood, but that when he saw her face he was convinced of her identity.

Clarence Mitchell, spokesman for Gerry and Kate McCann, said that the private detective agency, Metodo 3, employed by Madeleine’s parents had been informed. The Resident tried to contact Clarence Mitchell, but was unable to obtain a comment.

Gonçalo Amaral, former head of the investigation on the Madeleine case is now listed in a group of five PJ inspectors who are to go on trial, following alleged assaults on Leonor Cipriano, the mother of the nine-year-old Joana Cipriano who went missing in 2004, in Figueira, Portimão.

Under the accusations of torture are the PJ investigators Leonel Lopes, Pereira Cristóvão and Marques Bom. Inspector Nunes Cardoso is accused of forgery of documents, while Gonçalo Amaral is accused of false testimony and failing to report a crime.