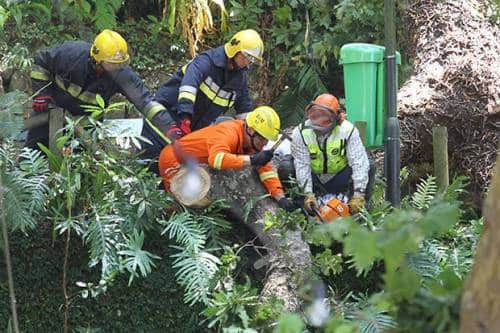 The case has been larded with innuendo and suspicion since it sent shockwaves through Madeira in August 2017, and now an ‘expert witness’ has come forwards with what may be the kind of dynamite that blows an irreparable hole in the investigation.

Former regional director of forestry Rocha da Silva claims “there was manipulation of evidence” in the probe into what caused a centenarian oak tree to crash down on festival goers on an otherwise perfect August day, killing 13 and injuring more than 50 (click here).

Say reports in the Madeiran press, he lodged ‘a request for clarification’ with DIAP ( the department of investigation and penal action) in Funchal in December.

At the time, Rocha da Silva dubbed it “a complaint presented by me on the evidence that points to a manipulation of evidence”.

Explains Lusa , the “manipulation of evidence refers to a mushroom that “existed for a determined period of time, then ceased to exist, and then returned to be present in the report into the tree’s fall which, at the time, was photographed by himself and by social media”.

Everything in this case has been shrouded in mystery from the outset.

There were those who claimed ‘everyone knew the tree was unsafe’; those who said it was “completely healthy” and various entities which appeared to be trying to pass the buck (click here).

In the end, the public ministry singled out three people: the mayor of Funchal Paulo Cafôfo, his deputy and councillor in charge of the environment Idalina Perestrelo and ‘head of division’ of parks and green spaces Francisco Andrade.

Since then, Cafôfo has gone on to win a second mandate as mayor (though for a different party) and the case against him been ‘partially archived’ due to ‘insufficiency of proof’.

Perestrelo and Andrade remain arguidos and are due to face trial on 13 counts of negligent homicide and 24 of causing offences to physical integrity through negligence.

Cafôfo meantime has put himself forward as a PS Socialist candidate for the regional (legislative) elections in September.

Now, according to Rocha da Silva “in diagnostic terms” the location of the mushroom indicates that, for it to have grown (on the tree) there must have been displacement of the tree, and by its nature – given that this is a mushroom that feeds off dead matter – this means that where it was, the material was already dead”.

It’s a fairly tortuous explanation, and it doesn’t instantly account for the mushroom ‘disappearing’ from the official report, and then reappearing.

This particular type of mushroom was described by Rocha da Silva as ‘of woody consistency’.

TVI24 has taken up the story saying this isn’t the first time there has been talk of a mushroom with regard to the report on the state of the fallen tree.

It now rests with further investigation to see ‘what it all means’ and who (else) it may implicate.

Rocha da Silva meantime explained: “I have come to make statements, and now the matter will be dealt with in the right place, within the judicial institution”.