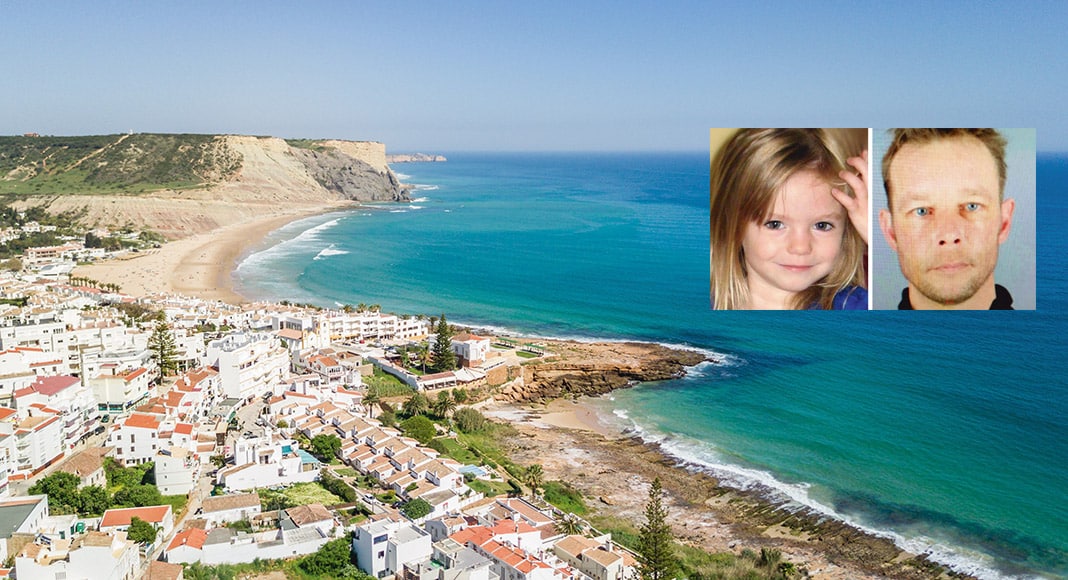 In another crazy week of revelations, the Algarve has found itself back in the media spotlight over the 13-year-old mystery of what happened to Madeleine McCann. Everything suggests police will be returning in force to dig in and around properties in the Praia da Luz area.

Out of the blue last Wednesday, a ‘suspect’ who had been considered and discounted by both Portuguese and English detectives in the past was suddenly ‘almost certainly the man’ who abducted the angel-faced child on May 3, 2007.

German police are convinced he killed her; British police are hedging their bets.

Career criminal Christian Brueckner was 30 years old at the time. He already had a string of offences to his name, some involving sex crimes against small children.

Currently in jail in Germany, Brueckner is credited with having told someone in a bar in 2017 that ‘he knew all about what happened to Madeleine McCann’.

That morphed into what is now a full-blown hunt for the ‘smoking gun’: ‘evidence’ in other words that Brueckner had something to do with Madeleine’s disappearance.

German police appear to have given focus to what has often seemed like a shambolic investigation going round in circles.

Prosecutor Hans Christian Wolters has told Sky News that “after all the information we got, the girl is dead”.

Investigators have “some evidence” that Brueckner “has done the deed” but not enough to charge him or indeed go to court.

“That’s why we need more information from people, especially places he has lived so we can target these places especially and search there for Madeleine,” he said.

Properties identified already include the house of an English couple in Monte Judeu, and a property 2kms outside Luz.

Hundreds of people are described as having ‘responded’ to the appeal for information splashed all over the press last week – but, this Wednesday, journalists in Portugal were already stressing that Brueckner is not the only active lead in the investigation that returns to the headlines almost every year at the beginning of the summer.

And television commentators have been quick to question the solidity of the case being constructed around him.

Certainly he sounds despicable, but after reports started linking him to other child disappearances, both here and in Germany, pundits threw their hands up in exasperation.

“It’s the same every year,” crime commentator Hernâni Carvalho said on popular chat show ‘Cristina’, suggesting the current media circus will lead to nothing “as have all the others”.

“He’s a pedophile with a criminal record who was in Praia da Luz when the child went missing. So what? There were lots of them around then…” he said.

One is that the funding of ‘Operation Grange’ – the British led police investigation into Madeleine’s disappearance, which has already spent well over £11 million – has run dry. Scotland Yard is waiting to hear whether a new request for more money will be granted.

The other is that a source for Madeleine’s parents has told The Telegraph newspaper that if a suspect is charged over their daughter’s abduction then they will be ‘renewing their legal battle’ with former PJ police chief Gonçalo Amaral who wrote the damning book Maddie: the Truth of the Lie, which suggested Madeleine died accidentally in her family’s holiday apartment, and that parents Kate and Gerry ‘covered it up’.

Amaral has said in the past that he believes the British Secret Service has helped deflect attentions in this case – and he predicted last year that a German pedophile serving time in jail would be used as a “scapegoat” to conclude the Madeleine investigation “once and for all”.

At the time, ‘revelations’ were centering on jailed child serial killer Martin Ney. But Amaral insisted there was another pedophile who would come into the frame.

For now, the bottom line is that police “need help from the people, from British tourists that might have been in Praia da Luz between 1995 (when Brueckner first arrived) and 2007 (when he returned for a spell to Germany)”.

Says prosecutor Wolters: “Only with these calls can we solve the case of Madeleine McCann.”

A British woman currently living in Lagos is said to be one of a string of girlfriends abused by Brueckner during the years in which he lived in the Algarve.

The woman, originally from Berkshire – now a mother of two children – is described as ‘very nervous’.

She is worried, says Correio da Manhã, that Brueckner may be released from jail and come looking for her.

Police have apparently already been in touch for further information on the man she dated back in 2004 when she lived in Praia da Luz.

The woman, described as ‘working in a bar’, appears to have had a Portuguese husband. The couple are now estranged.

Could Joana Cipriano have been killed by Brueckner? And little René Hasse?

These are questions brought up by the UK press which claim police are looking back at old cases and trying to check if any of them can be linked to Brueckner.

Joana Cipriano went missing from her home in Figueira, near Portimão, in 2004. Her mother and uncle were both found guilty of her murder, although a body was never found.

Six-year-old René Hasse went missing ‘from one minute to the next’ on a beach near Aljezur back in 1996.

His footprints “stopped in the sand”, his grandmother has explained. Theories at the time were that the child had been swept away by a freak wave. His body too has never been found.