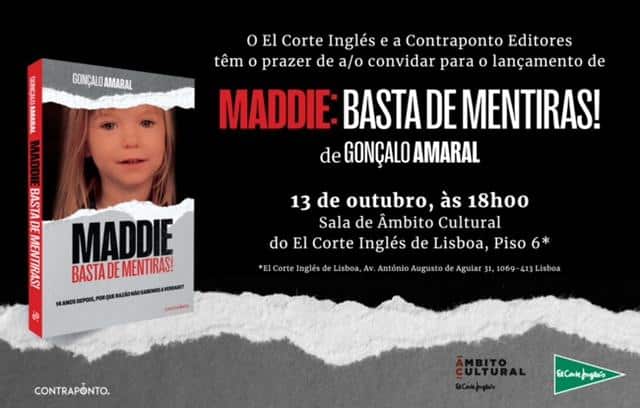 Just as UK media publishes further assertions by prosecutors in Germany that they have “new and strong” evidence with which to charge sex offender Christian Brückner over the disappearance of Madleine McCann, a new book by former PJ police coordinator Gonçalo Amaral is being launched for pre-sale, ahead of an official presentation taking place in Lisbon on October 13.

Published by Contraponto, part of the Grupo Bertrand Círculo, it presents the synopsis stressing the only certainty in this case that has already ruined the lives of so many people is that “on the night of May 3, 2007, after 10pm, in Praia da Luz on the Algarve, the alert was sounded of the disappearance of a British child, aged close to four years old”.

“Planned abduction? Abduction for motives of sexual gratification? Voluntary disappearance? Responsibility of the parents or others with the duty to look after the child? Accidental death (with or without ingestion of sleep-inducing medication)? Death hours or days before the alert over her disappearance? No-one knows. But there is a suspect. A suspect has been created without even having proved the existence of an abduction – and principally without even knowing the victim. It isn’t known, for example, if she was the target of abuse (as the episode in Mallorca would suggest). On the other hand, Maddie seems to have had speech difficulties for a four-year-old. But the child’s clinical history is missing, which constitutes a mystery. Neither did the parents provide it, nor did the British authorities permit access to it. What does the British police know? And the detectives hired by the parents? For how long will Portuguese justice maintain neutrality over a case which falls under its jurisdiction? After millions of euros and pounds spent, the family insists on the abduction theory, a pedophile is sought, German police investigate in an incongruous way and the case continues at the point it was at in 2007. Who is hiding the truth? The mysterious disappearance of a child deserves an objective, serious criticism”…

In a little over 200 words, the synopsis lays the starting point at which Amaral visits the web of misinformation that has been woven over the last 14 years.

Contraponto presents its author as a man who “for years effectively pursued all kinds of violent and organised criminality: thefts, robberies, murders, drug trafficking. He had an unblemished professional career, amply recognised by colleagues and superiors, including judicial magistrates, the Public Ministry, court officials and lawyers with whom he had the pleasure of working with for many years. His maxim is “Justice works in Silence” (click here). He was operational coordinator in the investigations of the ‘Maddie Case’ between May 3 and October 2, 2007, at which point he was removed from the investigation in an act unprecedented within the Judicial Police. He retired on July 1, 2008, after a 27 year career in the police force, in order to reacquire full freedom of expression in the case he investigated and to contribute, as far as possible, to the discovery of material truth and the realisation of justice. He has published the books “Maddie – A Verdade da Mentira” (Maddie: the Truth of the Lie) (2008)*, “A Mordaça Inglesa” (The British Gag) (2010) and “Vidas sem Defesa” (Lives without Defence) (2011).

Coming at a point when German prosecutors claim the latest suspect ‘could be charged by Christmas’ (when both the suspect and his lawyer say the whole case has been fabricated out of nothing click here) – Maddie: Basta de Mentiras! will have a public presentation next week to which journalists are invited.

It can be pre-purchased here.