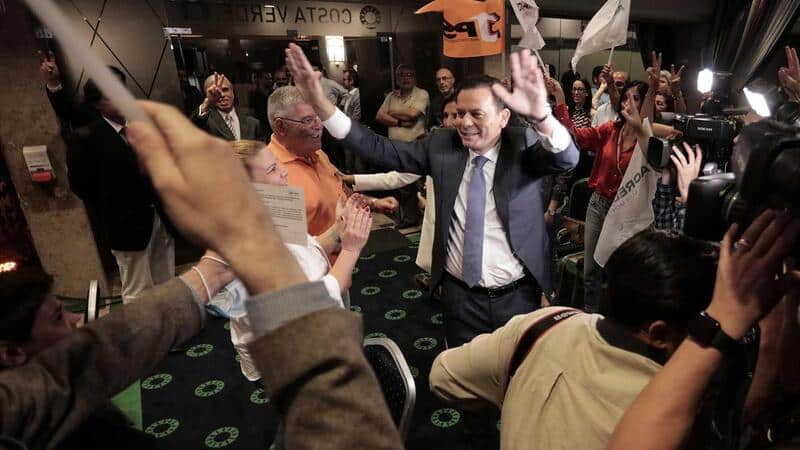 “The beginning of the end of Socialist dominance” in Portugal

The 49-year-old seasoned politician promises a robust opposition to ruling PS Socialists, and an alternative to the government when legislative elections are eventually called.

That date in 2026 seems a long way off, but the storm-clouds gathering on the horizon (see ‘Costa and Medina worried’ below) can, in the end, only contribute to a PSD resurgence.

Luís Montenegro has very firm ideas of how to take Portugal forwards (see box). He aimed his victory address in this regard, explains Diário de Notícias, speaking to the country rather than the party.

“Today is the beginning of the end of PS hegemony in Portugal”, he promised.

The PSD is no longer going to be “complicit or condescending in the path towards impoverishment” which has been the “watermark” of António Costa’s government.

The centre-right party under his leadership will be the “voice of everyone who waits for hospitals and health centres, for young people who cannot find answers for their qualifications in the workplace, for workers, for pensioners and for the majority who earn the minimum wage which has become more and more close to the average salary”.

Montenegro’s ambition is for the PSD to “construct an alternative project to pull Portugal from the tail of Europe and place it on the front line”; a “voice of hope, a voice of the future”.

Pointing to a leadership that promises bridge-building, Montenegro spoke of his adversary Moreira da Silva in glowing terms. He is “highly qualified, a politician ready to serve his country and we are not going to give up on his ideas, or on those who supported his campaign…”

Moreira da Silva for his part insisted that he returned to Portugal from his top job at the OECD in Paris to help his party in any way he can.

Coming the day after PS Socialists declared (another) “turning of the page” (with the passing of a State Budget that only has a few months left to run), the PSD leadership elections are the week’s event much more fitting of this phrase.

Outgoing PSD leader Rui Rio has been criticised for failing dismally in providing robust opposition. He has told journalists that his departure signals the end of his political life “full stop, paragraph, the end”.

Who is Luís Montenegro?

This is where it gets ‘interesting’, in that the new PSD leader is NOT a serving MP. He has been in the past. Indeed he has been an MP, party spokesman, a councillor and a mayor. But he lost his seat in 2019, and has been working hard at this political comeback ever since.

Montenegro’s stance that Rui Rio was a leader without any kind of ‘chutzpah’ led to various failed attempts at dislodging him which, in the end, the legislative elections of January did without mercy.

Luís Montenegro is a lawyer by profession, and has been working in the private sector since he left parliament.

Context is everything in Luís Montenegro’s success story last night. In spite of all the spin generated by the government about the EU bazooka / the ‘page turning’ budget, political/ financial commentators can see what is coming. “The prime minister and minister of finance know perfectly well that what is coming will be very tough: increasing interest rates, loss of purchasing power, difficulties for families and businesses paying loans, worsening condition of State finances, recession or at least stagnation”, writes José Gomes Ferreira. “The Governor of the Bank of Portugal, who when he was minister of finances did the opposite of what he should have been doing to prepare the country, has already started washing his hands…”

Mr Cost and his new finance minister “do no admit” to being worried, “in order to not cause panic”, Gomes Ferreira continues. But they know that problems stacking up “can make the lives of Portuguese people utter misery in coming times.

Nonetheless “it is in their nature to run the State with increasing public expenditure, distributing ever more benefits. This week ‘user fees’ (taxas moderadoras) are no longer paid to the SNS, even by Portuguese who are officially well off.

“The history of financial management in this country doesn’t change: for certain governments there is always money to be found to capture electors. When things go badly, they blame whatever is going on elsewhere – be it war, or financial crisis, or simply because the world has changed… and then new governments who come in and have to resolve the problems are accused of having called in the Troika and cutting rights and salaries…”

In other words, Luís Montenegro will have his work cut out for him if he doesn’t want to end up in history as just another PSD leader who came in to try and mop up a massive Socialist mess, and ended up being voted out due to tough decision-making.

Remarks in the run-up to the leadership contest show Montenegro is aware of the risks. He did not talk of just a PSD future, but a future involving “all the non-Socialist family”: bridge-building with other parties, potentially even right-wing CHEGA which for all the vilification thrown in its direction has managed to become Portugal’s third political force.

Luís Montenegro’s plans for modernising his own party are one aspect, but in national terms he is described as “considering the SNS health service fundamental” and wanting to get on and ensure that every citizen has a GP. This is not in any way ‘groundbreaking’: every party seems to set out to establish this, none of them ever having success. Montenegro’s ‘difference’ is that he wants to see incentives given to healthy lifestyles and has proposed an Internal Happiness Index (Felicidade Interna Bruta)…

When it comes to teaching, Diário de Notícias says Luís Montenegro wants to see teachers once again “valued, throughout their careers“. He wants to see the reintroduction of vocational courses in articulation with professional education – and he wants to see businesses encouraged to provide pre-school crèches.

In terms of finance, he defends a reform of the IRC tax regime, promoting reinvestment of business profits, as well as IRS relief and tax scales weighted against inflation.

For Justice, Montenegro defends “structural transformation for the system of economic justice” – leading to cases being dealt with much more quickly.

For the environment, the new PSD leader is understood to want to anticipate ‘carbon neutrality’ scheduled for 2050; to want to introduce incentives to families and business to increase energy efficiency and defend that the production of energy from renewable sources “should be based on a framework of competition, not of State rents”.