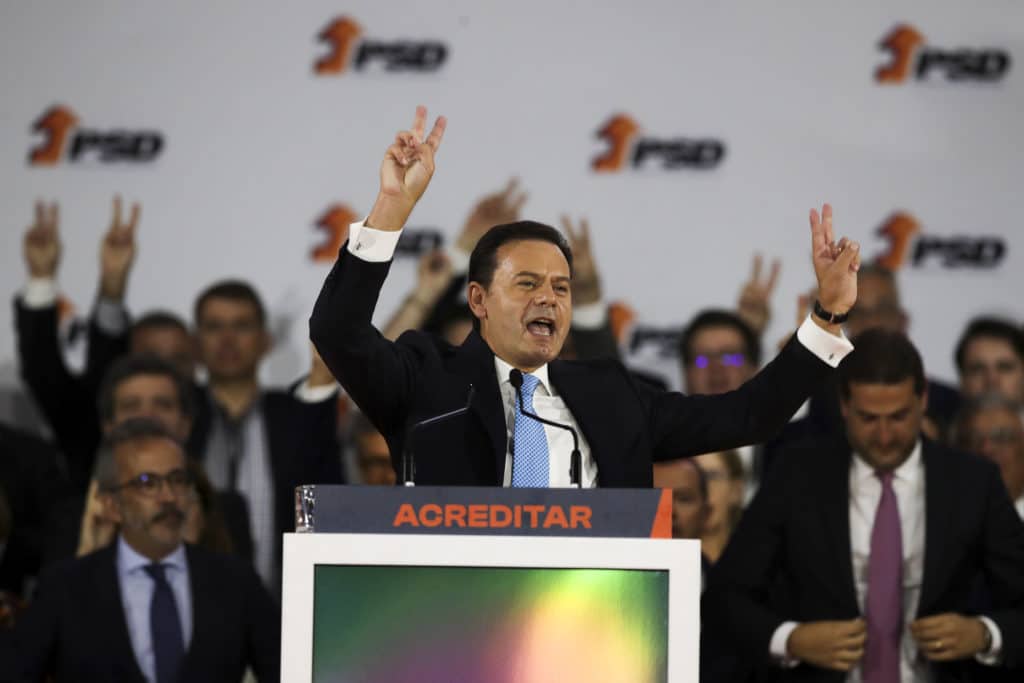 The 40th congress of the PSD (main opposition) party ended today in Porto with new leader Luís Montenegro vowing to do “everything to give Portugal a new government”.

With members of his team including Lisbon mayor Carlos Moedas, Montenegro is powered-up and promising change: no more lukewarm opposition; no more crises; no more ‘stink of old age’, of a worn-out executive stumbling about from one crisis to the next; this is time for taking PS Socialists head on.

Montenegro outlined seven main priorities for his leadership: The “special pertinence” of the first being the “combat the famine of life”. Families are beginning to despair, he said, because money is not simply “not giving them everything, it is not giving them the essentials”.

Health comes next. “If the government is not guilty for the war, this cannot be said for the state of the Health (service)”, he said – running through all the well-versed issues of ‘lack of doctors, closure of casualty units, long waiting lists for consultations – and even longer waits for surgeries. It’s time for “reform, restructuring and reorganising for the SNS health service”.

Third priority is to reduce taxes. “With asphyxiating tax burdens we neither have a middle classes or a social elevator (…) The behaviour of the State in terms of taxes is absolutely immoral,” he suggested – while his fourth priority is to “retain talent” (meaning qualified young people), again by more attractive taxation.

Luís Montenegro’s plans also involve creating a programme to attract immigrants (bearing in mind the country faces a “structural problem” of plummeting birthrates, which will only get worse without ‘new citizens’), and a pact for digital, energetic and environmental transition.

The 7th and final priority is to call a halt on plans for a referendum in 2024 on  ‘regionalisation’ (on the basis that it makes no sense in the current global context).

The PSD is a party with very simple focus, stressed Montenegro. “We do not have existential problems; ideological schisms, we are not interested in sterile conversations of Left and Right, of green lines or red. Our orientation is simple: the citizen. The person”.

The new party leader’s speech has been interpreted by Lusa however as indicating the PSD under Luís Montenegro will have no truck with CHEGA – the country’s 3rd political force which would like to see a ‘meeting’ of parties against the Left, in order to oust the government.

His words were that he did not want to associate the party with “any xenophobic or racist party”, and not wanting to be the leader of a government that breaks those principles.

“ I will never surrender the principles of social democracy and the essence of our electoral programme to govern at any cost,” he said, alluding to the past, where the PS joined forces with the radical Left and “violated the principles of moderate Socialism”.

CHEGA leader André Ventura has thus been less than effusive over Luís Montenegro’s address, suggesting the PSD is setting itself up ‘yet again’ to be “a crutch” for the PS.

“The PSD has only two options: either it approaches the centre and makes agreements with the PS, or it tries to win the Right, with CHEGA”, he told Lusa.

Wednesday will be a ‘test’, Ventura added – as this is when CHEGA’s motion of ‘no confidence’ in the government comes up for debate.

André Ventura has stressed that if health minister Marta Temido and Infrastructures & Housing minister Pedro Nuno Santos are dismissed beforehand, CHEGA will withdraw the motion. If not, the “government will have to discuss it in parliament” – and even though the PS majority will reject it, a signal will have been given. “Naturally we hope the PSD will join the motion of censure, giving a signal from the Right”, he said.

Luís Montenegro himself cannot vote in parliament, as he is not an MP. His week is starting with a trip to Pedrógão Grande (the municipality devastated by wildfires in 2017 and still beset with social problems). He has also pledged that from September he will spend a week in every district of the country – archipelagos included – to hear exactly what people are thinking and feeling, and what they want from a government.