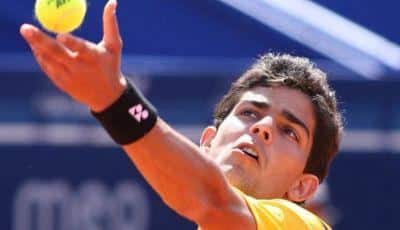 Under pressure to defend the points gained by sensationally reaching the second round here in 2008, the 25-year-old from Faro defeated Ricardo Hocevar and Santiago Gonzalez before failing at the last hurdle against Germany’s Dieter Kindlmann.

A reprieve was immediately at hand, however, as Machado was given a ‘lucky loser’s’ berth in the main draw following the withdrawal of Mardy Fish.

At the time the Algarve Resident went to press on Wednesday, the Algarvian was still waiting to play his first match proper against Austrian Daniel Koellerer, who he beat in straight sets during the San Marino Open two weeks ago.

Fellow Portuguese Frederico Gil exited against Indian number one Somdev Devvarman after his opening encounter but 16-year-old Michelle Brito survived an early scare to progress into round two of the ladies draw.