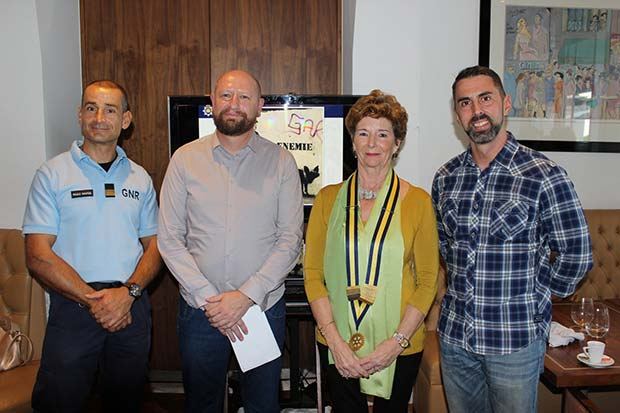 Thanks to Major Paulo Santos, Freddie and some of his colleagues were assigned to show Steve how things are done here in the Algarve starting with a visit to the GNR station in Loulé.

Steve was able to see first-hand the dogs and horses’ teams, traffic policing and many other aspects of the work of the GNR.

At the end of his time spent with the GNR, Steve gave a presentation to Rotary members and guests at the Conrad Hotel.

Steve explained in more detail his role in Gwent and how the force was combating the problems in one area of Gwent: in particular drug gangs, burglaries and prostitution.

Thanks to targeted policing, drug gangs had been eliminated in this area. However, the force remains vigilant as there are always criminals ready to move into the vacancy left by the gangs.

Steve was “very impressed” with the respect afforded by the public to the GNR which is sadly lacking in many areas of the UK. He commented on the warm welcome he had received from the GNR and his appreciation of the time everyone took to make his visit memorable.

It was his first time in the Algarve and he was so impressed he hopes to return with his two sons in future.