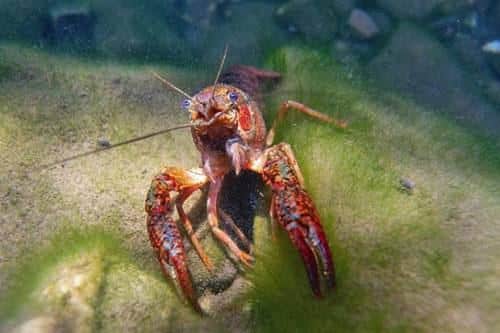 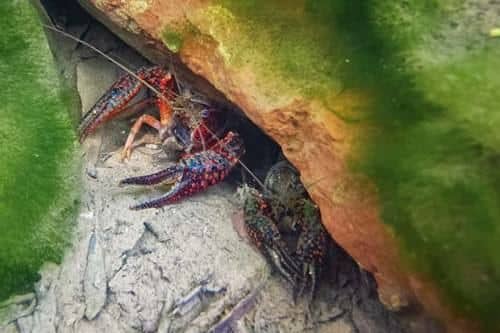 A discarded claw from either a fight or an otter 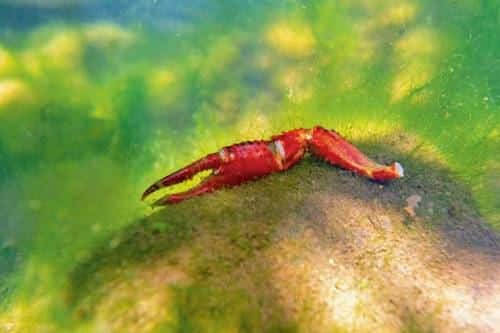 Putting up a fight 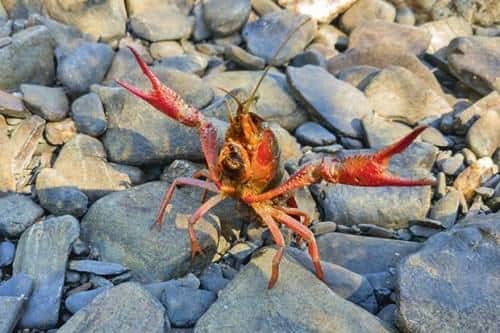 As the name suggests, the Louisiana Crayfish (Procambarus clarkii) is native to the southern regions of the United States and Northern Mexico. Introduced into Spain in 1973, it took until 1979 for the first recorded Portuguese sighting in the Caia River (a tributary to the Guadiana). It has since spread to most of Portugal and is classed as an invasive species due to the rapid breeding and colonising of new territories. Of course, this has a negative effect on the native European Crayfish and other local aquatic species and vegetation.

Crayfish are foragers and will eat anything they can find. They are omnivores, eating plants, fish and other crayfish, dead or alive! They can normally be found in the rivers of Portugal but can also be found in damp crop fields such as rice plantations. I have read an unconfirmed report that in the Baixo Mondego region, it caused a large drop in profits of rice production due to their burrowing activities in the soil.

They can be spotted with ease in the rivers and identification is simple due to their bright-red appearance, although other colour morphs have been recorded. They are fast-growing and can reach up to 12cm in length. In and out of water, they are slow movers but, underwater, they have an incredibly fast retreat in that they swim backwards.

The Odelouca River runs near our house and dries during the late summer, leaving small pools of water where the crayfish wait until the rains start the river flowing again, usually in late autumn. However, in some locations, the pools dry and the crayfish burrow deep into the damp mud.

At this time of year, I’m often greeted by one with its claws outstretched ready to put up a fight as I walk along the river bank. Of course, out of water they have no quick retreat so have no choice but to put up this aggressive stance. I usually take a photo, laugh at its attempt to look threatening and leave it to go about its business.

You are probably waiting for the answer to the question “can I eat them?”. Yes, they can be eaten and, in many countries around the world, they are boiled in the same way as a lobster. I’m not aware of any locals in my area eating them, however, I have read reports of people catching and eating them.

Of course, it’s not just a food source for humans. Although an invasive species, there is no doubt that the Louisiana Crayfish has become an important source of food for our wildlife. On just the small stretch of the Odelouca River that runs near the house, I have seen birds such as egrets, storks and even kingfishers catching the crayfish.

During the early summer months, the river banks and particularly a local concrete bridge is often littered with discarded front claws from a night of feasting. The ants seem to be grateful of these! If the Louisiana Crayfish was not present, it’s hard to understand if these wildlife species would flourish in the numbers they appear to.

Some of my nature photography walks include a stop at the river to view the crayfish and these are completely free of charge. More information and registration is available on my website.

Craig Rogers is a Wildlife and Nature photographer from Wales now living in the Algarve offering Photography Workshops. More information, photographs and blog can be found on his website at
www.craigrogers.photography.