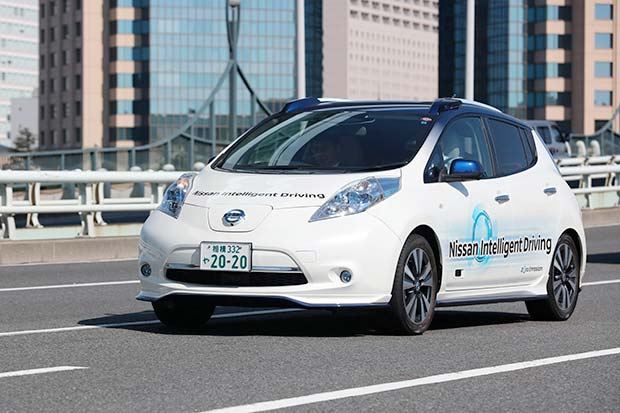 Hot on the heels of news last month of greener cars for London comes the very real prospect of driverless cars taking to the streets of the capital. Earlier this month, Nissan brought their multi-million pound prototype, called ‘Leaf’, to London for a road test.

London’s roads are amongst the most challenging in the world for drivers due to the sheer volume of traffic. These new vehicles are laden down with cameras, scanners, lasers and currently a boot full of computer equipment!

They will allow drivers to take their hands off the steering wheel and feet off the pedals when they are released into overseas markets – including London – from 2020 onwards. The first road test was around the Excel Centre in London’s docklands and did not go totally smoothly when the car lurched alarmingly towards the kerb at one stage.

Technicians tinkered with the complex computer system before a second run when the car drove around roundabouts, junctions and along one of the capital’s notoriously busy arterial routes.

The ‘Leaf’ stopped correctly at lights and junctions, indicated when required and accelerated and applied the brakes at appropriate times. Passing drivers looked on in shock as the ‘driver’ turned to talk to passengers in the rear of the car with clearly no hands on the steering wheel!

Of course, these new cars stay within the speed limit which may also be very handy when new speeding fines come into force across the UK from April. With the maximum fine shooting up to £2,500, this car may be an absolute must for city driving.

Happily coinciding with this road test is a great new exhibition at the London Transport Museum. Located right the heart of Covent Garden, this wonderful museum is full of old buses and trams and is always a favourite with children as they can clamber around on some of them. Now though, alongside this glimpse at London’s past is a display of how driverless cars will change how London looks in the future. It is predicted that by 2050 virtually all cars will be driverless and these odd-looking, pod-type vehicles will certainly change the look of the place forever. The exhibition of familiar scenes with very unfamiliar vehicles runs until April 23 and is worth catching if you can.

A pad in Chelsea?

Margaret Thatcher’s one-time family home, a two-bedroomed flat in Chelsea has come onto the market with a whopping price tag of £1,235,000 (€1.42m).

The Iron Lady moved there in 1953 with her two young children (twins, Mark and Carol) shortly before re-launching her political career. The flat was owned by her husband, Denis, and remains very much as it would have looked in those days. A famous picture of Margaret Thatcher shows her wallpapering this very flat but sadly the rather hideous wallpaper has been removed.

And whilst the price tag seems high, this is actually a bargain basement price for Chelsea Manor Street. As a leasehold flat and with the freehold owned by the Cadogan Estate, this apartment will only be yours until 2041 when the lease runs out. To extend the lease, the new owner will have to pay a further £600,000 (€690,000), plus stamp duty of course. But you will be then right in the heart of the most fashionable borough in the capital. And, of course, there may be one or two interesting ghosts to keep you company …

Move to the right – again!

Well, if you want to stand on an escalator on the tube that is! Keen readers of this column will remember a report that Transport for London had dreamt up the frankly ludicrous plan that people could stand on both sides of the escalators – at certain stations. This seemed like a recipe for confusion and arguments when passengers had traditionally always stood on the right and walked on the left – but the perceived wisdom at the time was that it would somehow reduce congestion. After trials, the scheme has been abandoned.

Following scenes of utter confusion and tube staff shouting instructions at people through megaphones, tube bosses say they have no plans to continue or extend the scheme. Apparently results were at best mixed with some positive results at peak times on longer escalators, but commuters welcomed the change back. They said they were more interested in Transport for London making the tube ‘safer, more affordable and cleaner’. Fair point, really.

In a city famous for a lack of interaction between people, ordinary Londoners have once again shown they can come together to help people when it really matters.

Two pedestrian tourists in London were knocked over by a motorcycle on Waterloo Bridge. The two people were seriously injured but passers-by, many emerging from a night out at the nearby National Theatre, rushed to help.

They stopped traffic on the bridge using the lights on their mobile phones whilst an off duty doctor battled to save the lives of the couple in their sixties. Others gave their coats to keep them warm and talked to them to keep them conscious. Both people survived though the woman suffered serious leg injuries.

One of those who helped, Siobhan Daly said: “I felt, this is London. We hear so much about how bad it is but I just saw brave, loving people and felt proud everyone cared so much and acted so selflessly.” True Brits.

The Ivy was for so long a single venue restaurant in the West End, famous for being the favoured dining establishment for the stars of TV and film. Now though, branches are popping up in some of the smarter areas of London as well as one or two other UK cities. Owner Richard Caring has just announced his first venture into the Square Mile of the City of London.

In June, a new Ivy, called the Ivy City Garden, will open in Old Broad Street. Caring said: “I feel that the City has changed a lot in the last few years. It’s now an exciting, vibrant area of London to be part of.”

The restaurant will be open from 7.30am to catch the breakfast trade and this will be the ninth venture for the brand.