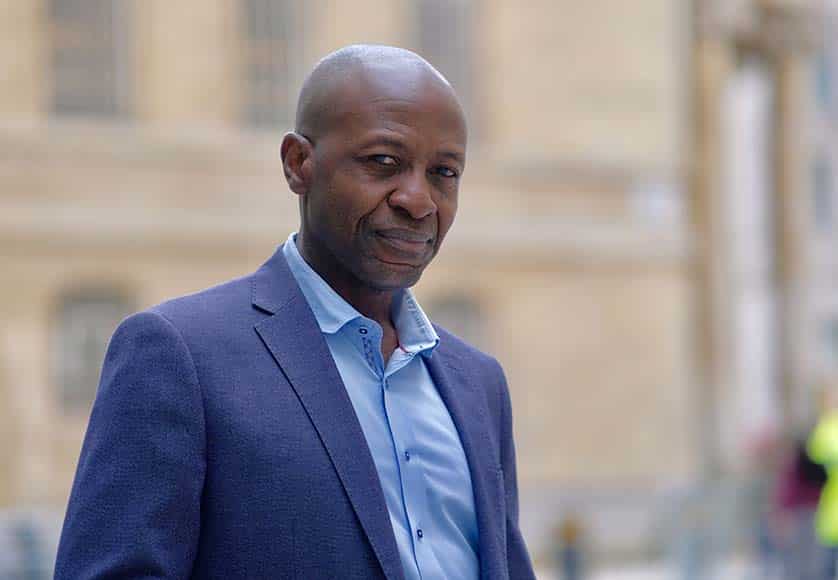 One of the most interesting things about London is the huge diversity of people who call it home.

Astonishingly, the population of the UK capital is now just under nine million, making it significantly higher than New York and not far behind the entire population of Portugal! The culture, atmosphere and tolerance in London are fertile ground for cultivating the variety of fascinating people who have an amazing tale to tell of their life journeys.

London Calling is hoping to bring you thoughtful insights into the lives of some of these characters, wherever possible in their own words, as a regular feature. To kick off this new idea, we are honoured to hear from actor, producer, consultant, coach and all-round amazing man LEKE ADEBAYO. Your columnist had the honour of sitting next to Leke at a lunch hosted by Downton Abbey author, Lord Julian Fellowes.

As Leke and I listened to the great man tell his tales of writing and inspiration for his work, the idea of this new direction for the column from time-to-time came to me.

The Life of a London Slasher

“I don’t understand what you do”, boomed a relatively good acquaintance at a party a few months ago.

The speaker? One of the brightest people I know and a KC (formerly QC), no less.

So, what career could I possibly have that could flummox a learned senior officer of our Majesty’s law courts?

Dear Readers, I am (alas) none of these things – as enticing as they may seem.

In colloquial employment terms, I am what is increasingly known as a “Slasher”. By which I mean: I have a portfolio career.

Formerly a corporate lawyer in the City of London, I now work as:

And, yes (since you didn’t ask): they are as fun and as challenging as they sound!

So, what are the bright spots and what parts are less enjoyable?

So, rather than getting a junior trainee or associate in a law firm to handle relatively basic and mundane review of documents and/or due diligence, they hire former lawyers (like me) to do this work at much reduced rates with the projects utilizing state-of-the-art technological software.

The first fund of LAV raised $36.3m for the benefit of tech startups in 21 countries across Africa (Fintech, Proptech, EduTech, Data & Logistics, E-Commerce/Marketplace, etc), so as to address some of the major (soft) infrastructural challenges and bottlenecks on the continent.

So, my job will be to (partly) prepare the ground for their visit and introduce them to prospective investors who might not already be on their radar.

A really fascinating talk with multiple insights and titbits for all concerned but especially for me as an actor and writer. Business cards were exchanged and lifelong friendships will be formed (I’m sure).

(A small prize to anyone who guesses correctly (first time) who the Guest Speaker is)!

Africa has over 1.2 billion people with a median age of 20. If harnessed and nurtured effectively and responsibly, that could create a gigantic workforce for economic production and sustainable consumerism for the internal market. And, with the new African Free Trade Agreement starting to take effect, laws are now in place to regulate the informal trading across borders that is already happening on the ground. https://openknowledge.worldbank.org/bitstream/handle/10986/34139/9781464815591.pdf

At the event, I was approached by an attendee who overheard me chatting with the host, to potentially coach some of the mentees that will form part of his new coaching company.

So, that was a very inspiring way to spend an evening and to catch up with old chums and make new contacts.

In what ways can having a portfolio career be more challenging than a regular job?